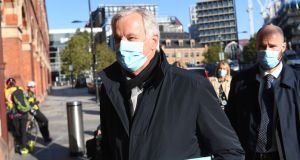 The European Union is seeking additional concessions from the UK before intensive negotiations can begin on finding a trade deal, an EU diplomat said as chief negotiators met in London with just weeks left to find agreement.

Michel Barnier for the EU and David Frost for the UK met for closed talks in London as both sides warned that significant differences remained on fishing rights, fair competition rules and governance.

“We need to get a little bit more from the UK side before he is willing to use the submarine or the tunnel,” said a senior EU diplomat in reference to the intensive period of negotiation that would kick in in the run-up to a deal.

A spokesman for the UK government said some progress had been made but the two sides did not yet see eye to eye on all matters.

“We’ve had useful discussions this week and progress has been made in some areas,” the spokesman said. “However, there still remain differences on some important issues.”

Some member states have become a “bit nervous” about the prospect that no deal will be reached, according to the EU diplomat, something that would mean an abrupt shift to trade terms at the end of the year, which would disrupt trade and supply chains in and out of the UK due to the tariffs and paperwork that would kick in.

“You always need to do contingency planning. I mean, the end of the year is approaching rapidly and we still don’t know whether there’s going to be a deal or not,” the diplomat said.

“Companies need to prepare, but also in addition they need to prepare for a no-deal. But that does not mean that we feel that a deal is impossible. I think it’s still very well possible.”

UK prime minister Boris Johnson has said his preference is to reach a deal, but not at any price.

The Irish Government issued a warning to businesses on Friday to prepare for changes in trade terms that will come into force on January 1st whether a deal is found or not, urging companies to ensure they know how to manage customs and disruption to supply chains.

Attempts to reach agreement have been complicated by a move by the UK to undercut its divorce treaty reached in 2019 by introducing a Bill that would over-ride aspects of it, including arrangements for checks between Britain and Northern Ireland that were agreed in order to avoid a hard border on the island.

EU and UK officials met to discuss the implementation of those agreements on Friday and “exchanged updates”, according to a UK government statement, which acknowledged that differences persisted between the two sides.

“The UK remains committed to constructive engagement to resolve all outstanding issues as swiftly as possible,” the statement read.

One politically sensitive issue is fishing, which is a hot-button topic for several member states with fishing fleets that have traditionally relied on access to British waters, including France, Denmark and Belgium.

Though the industry employs just 180,000 people and accounts for less than 1 per cent of the bloc’s economic output, politicians warn that cutting off access to fishing waters could devastate coastal communities and drive resentment towards the EU. But some see the issue as surmountable.

“I do not believe that . . . this will be a major impediment to an EU-UK agreement,” the EU diplomat said of fisheries.

“What I see now is that the UK . . . they see it as a lever to gain market access to the European Union. I think that’s the game that we’re seeing right now.”