Brexit: End of an era as United Kingdom fully leaves the European Union 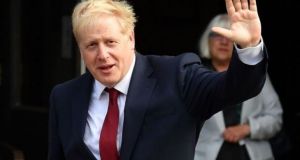 British prime minister Boris Johnson: UK is ‘free to do things differently, and if necessary better, than our friends in the EU’. File photograph: PAUL ELLIS/AFP/Getty Images

The United Kingdom has left the European Union four years, 27 weeks and two days after a referendum that split the country in a departure that was notably low key and marked by warnings of likely disruption to come.

In a sometimes sombre new year message, British prime minister Boris Johnson largely ignored Brexit, an outcome he arguably shaped more than any other politician, to focus instead on the toll of Covid-19 and what he called “the grimness of 2020”.

With the majority of England subject to tough restrictions, and hospitals warning of a calamitous winter coronavirus crisis in the weeks ahead, the chimes of London’s Big Ben, temporarily reconnected from ongoing restoration work, sounded across near empty streets at 11pm.

This was the pivotal moment for Brexit. While the UK formally departed the EU at the end of January 2020, a transition period meant almost all tangible changes were deferred – until 11pm GMT on Thursday.

From Friday morning, individuals and businesses both in the UK and beyond face a dizzying new array of red tape, a good deal of it still to be confirmed, covering everything from travel, residency, work and tourism, to the supply of goods and services.

Considerable government anxiety remains focused on the situation at the Channel ports in Kent, particularly after Covid-related delays earlier in December saw thousands of lorries backed up at a disused airfield – one of 10 sites prepared for possible Brexit-caused disruption.

With roads largely quiet as many freight firms seemingly waited to see how the new system began, officials were hopeful of a smooth start to the new era. However, they remain braced for possible delays next week, with government estimates suggesting that more than half of smaller businesses have not yet prepared for the end of the free movement of goods and services.

It all adds to a prime ministerial in-tray already overflowing with the impact of coronavirus, not least the government’s decision to defer the return to school of some pupils next week, and with Labour accusing the education secretary, Gavin Williamson, of “serial incompetence”.

Mr Johnson used much of his New Year message to herald the end of a year “in which the government was forced to tell people how to live their lives, how long to wash their hands, how many households could meet together”.

It was a far cry from his 2019 message, where fresh from a crushing election victory, the prime minister promised “a fantastic year and a remarkable decade for our United Kingdom”.

Mr Johnson did maintain some of his trademark Brexit boosterism this time, arguing that the development of the Oxford/AstraZeneca coronavirus vaccine was illustrative of a UK “free to do things differently, and if necessary better, than our friends in the EU”.

“This is an amazing moment for this country,” the prime minister said, citing what he said were boundless possibilities with trade and innovation. “We have our freedom in our hands and it is up to us to make the most of it.”

The reality, at least in the short term, is that 11pm on Thursday marked the end of many previous freedoms for British individuals and businesses, even to the extent of restricting where freight drivers can travel within the UK.

To mitigate against the buildup of lorries at Channel ports, hauliers now need what is called a Kent access permit, or “kermit” for short, to even enter the county. From Friday, those without the 24-hour pass can be pulled over by government officers, fined £300 (€335) and sent back.

Northern Ireland will see a more phased-in approach to the post-Brexit world, with the requirement for customs declarations when retailers in Britain send goods to non-business customers in Northern Ireland deferred for three months.

With Northern Ireland remaining under the rules of the EU’s single market and customs union, animal-based food products shipped there from the rest of the UK will also require export health certificates from April.

Elsewhere, one issue left unresolved in the trade deal, agreed between Mr Johnson and the EU on Christmas Eve and voted into law by parliament on Wednesday, has been partially settled.

A last-minute agreement between the UK government and Spain will allow Gibraltarians to move freely between the British overseas territory and the EU - but the agreement will only come into force later in the year.

Spain’s foreign minister, Arancha Gonzalez Laya, said she expected border controls, albeit lightly applied, to be required for the next six months to allow for the deal in principle to be formalised.

Under the agreement, Gibraltar will be part of the EU’s Schengen free-travel zone. Checks will instead be undertaken at the Rock’s airport and ports by the EU’s Frontex border agency, a point of contention in talks with the British government.

Dominic Raab, the UK foreign secretary, said: “All sides are committed to mitigating the effects of the end of the transition period on Gibraltar, and in particular [to] ensure border fluidity, which is clearly in the best interests of the people living on both sides. We remain steadfast in our support for Gibraltar and its sovereignty.”

Spain has refused to allow the post-Brexit trade and security deal to be applied to Gibraltar, over which it has a territorial claim. The head of Gibraltar’s government, Fabian Picardo, said: “There will be complexity to come – we may end up with a deal on the [free] ovement of people but not goods.” – Guardian