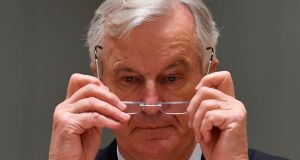 The prospect of a Brexit deal before Christmas hung in the balance on Tuesday night after Michel Barnier rejected Britain’s latest offer on access to its fishing waters. Mr Barnier said his negotiations with Britain’s chief negotiator David Frost were “really in the crucial moment” as European governments warned that any deal agreed after Wednesday will come too late to be implemented on January 1st.

“We are giving it the final push. In 10 days, the UK will leave the single market and we continue to work in total transparency, with the member states right now and with the parliament,” he said.

Mr Barnier told a meeting of EU ambassadors in Brussels that the British offer on fish was unacceptable and that other issues, including level playing field guarantees of fair competition, were not fully resolved. Sources said he described as final the EU’s offer of returning to Britain 25 per cent of the value of the fish caught by European boats in British waters as final.

Britain has proposed that the EU sacrifices 35 per cent but the deal would exclude pelagic species such as mackerel, which are important to Irish fishermen. Mr Barnier told the ambassadors that excluding pelagic species meant that Britain was effectively demanding that the EU should give up 60 per cent of the value of the fish its boats caught in British waters.

The two sides remain divided over EU access to waters between six and 12 miles (10-20km) from the British coast and on the length of a transition period before any fisheries deal should take effect, with Britain proposing five years while the EU wants seven.

Downing Street on Tuesday declined to confirm or deny reports that Boris Johnson and Ursula von der Leyen discussed Brexit during a phone call on Monday.

Mr Johnson on Tuesday rewarded a number of prominent Brexiteers with peerages in a list that drew an angry response from the lord speaker, former Conservative minister Norman Fowler.

Among 20 new peers is Peter Cruddas, a businessman who has given millions of pounds to the Conservative Party and the Vote Leave campaign, who was rejected by the House of Lords Appointments Commission as unsuitable to sit in the upper house.

The prime minister’s other nominees include former Conservative MEP Daniel Hannan; Dean Godson, director of the Policy Exchange think tank and a biographer of David Trimble; and former Conservative minister Richard Benyon. Lord Fowler complained that the 16 new peers bring Mr Johnson’s appointments to the Lords in 2020 to 52 and the total number of peers in the House above 830, almost 200 more than the House of Commons.

“To add insult to injury, for the second time the announcement of new peers has been made when parliament is not sitting,” the lord speaker said.

“Sometimes the Lords itself is blamed for a failure to change. My answer to that is – don’t blame the Lords, blame successive governments who have avoided the subject.”