Brexit: Deal greeted with joy and foreboding around world

World reaction: ‘Becoming global free trader in 2016 like turning into communist in 1989’ 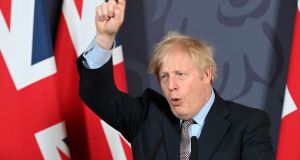 Britain should be congratulated for coming to a Brexit deal with the EU, but be wary of the very different world they are walking into, international analysts have said.

Outside Europe, politicians, experts, and media took a short break from Christmas and the pandemic to welcome the end of Britain’s long and torturous Brexit process, but there was little in the way of celebration.

In the New York Times, Mark Landler reflected on how much Britain, and the world, had changed since the 2016 vote, when a narrow majority of people were “tempted by an argument that the country would prosper by throwing off the bureaucratic shackles of Brussels”, develop new industries and cut its own trade deals.

But now the world is more protectionist and nationalistic, and vulnerable post-pandemic.

“The world is now dominated by three gargantuan economic blocs – the United States, China and the European Union, ” wrote Mr Landler. “Britain has finalised its divorce from one of them, leaving it isolated at a time when the path forward seems more perilous than it once did.”

In that same piece, Thomas Wright, the director of the Center on the United States and Europe at the Brookings Institution cut to the chase: “Becoming a global free trader in 2016 is a bit like turning into a communist in 1989. It’s bad timing.”

In a comprehensive step through of the politics behind history, Linton Besser, the Australian Broadcasting Corporation’s Europe correspondent, predicted Boris Johnson, ever the populist, would swing with the wind on whether the deal was working out.

“The prime minister will continue to trumpet the breakthrough for as long as it’s advantageous to do so,” wrote Mr Besser. “Then, in the not-too-distant future, when electoral profit beckons, he and his allies will find a way, whatever rhetorical contortions are required, to condemn the EU all the same.

The deal will be reprosecuted – perhaps by Mr Johnson himself - in pursuit of another chance to wave a kipper at those pesky Europeans from up on a stage.

“And that’s because Europe has for decades been a very handy straw man for many in the establishment, not least Johnson himself, who paved a path to politics with wildly exaggerated newspaper columns pouring scorn on European cooperation.”

Chinese state media reports on Brexit were viewed more than 140m times on microblogging platform, Weibo, but they did not appear to publish any Chinese-language commentary.

The state-backed tabloid, Global Times, said the deal was “a Christmas gift not only for the British economy but also for the Covid-19-battered global financial market”.

The editorial said the world’s markets were still struggling with the pandemic, and looking for “less chaos”. It commended the British government’s “last ditch efforts” to secure a deal under so much pressure. “There is no denying that a no-deal Brexit would lead to a dramatic change in the life and employment prospects of the Britons,” it said.

In English, Xinhua said that while the deal will “certainly help avoid a Brexit cliff edge”, it was not “a Christmas gift for all”.

Other English-language state media, including CGTN and China Daily, went with an op-ed by former MEP Jonathan Arnott. Arnott wrote that the last-minute nature of the deal – on Christmas eve and a week before deadline – was “breathtaking, though hardly surprising”. “The world is changing,” he said, and how the UK deals with the growing markets of China, India, and South America will be “pivotal”.

“One way or another, it must demonstrate a clear strategy: unless such trading relationships are signed, sealed and delivered, the UK cannot claim to have gained economically from Brexit.”

Japan’s finance minister, Taro Aso, told reporters he welcomed the deal, and “it should be highly valued that a broad agreement was clinched between the two”.

A US state department official said the US was committed to negotiating a comprehensive free trade agreement with the UK. “We support the UK in its sovereign decision to depart the EU, and we look forward to continued strong relationships with both the UK and EU,” they said.

The Times of India reported the agreement left “critical parts of the relationship to be worked out later”, and WIO News reported the two parties had “finally agreed” on a deal, and led on reassuring comments by the EU’s Ursula von der Leyen, that the two sides would “stand shoulder to shoulder to deliver on our common global goals”.

However it also reported on economists’ warnings that “leaving the EU’s orbit will still hurt” the world’s current sixth largest economy. – Guardian