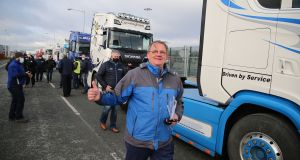 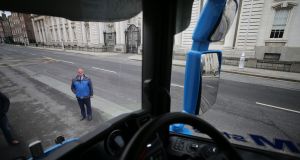 Lorry drivers have hand-delivered letters to the European Commission and the Department of the Taoiseach complaining that Brexit border controls will bring trade to “a complete standstill” if not addressed.

A convoy of about 30 lorries drove to the Terminal 11 border checking facility at Dublin Port before a haulage industry group hand-delivered letters of complaint to the EU Commission’s offices and the Department of the Taoiseach in Dublin.

The Irish Road Haulage Association said in the letters that “excessive and unrelenting regulatory zeal” managing Brexit checks at Irish ports will reduce trade, commerce and employment and pose “a direct and serious threat to the viability of our economy.”

The hauliers have asked the EU Commission president to intervene “to address serious and concerning obstructions” to trade from Ireland from the imposition of border and customs controls associated with Brexit.

The industry body has suggested that the EU’s chief Brexit negotiator Michel Barnier be sent to Dublin to assist the Irish authorities co-ordinate the response to Brexit.

The group has also requested that the Government appoint an external reviewer from outside the public service to oversee how the Revenue Commissioners, the Department of Agriculture, the Garda Siochána, the HSE and the port authorities are managing the response to Brexit.

Eugene Drennan, the president of the IRHA, told Ms von der Leyen that hauliers and their customers have experienced “serious and unnecessary obstructions to the free movement of goods in Irish ports” not as a result of the new rules but how they are applied by the Irish authorities.

The group has asked EU to dispatch a “senior special representative of the EU Commission” to assist the Irish authorities coordinate their response to Brexit and “to take measures needed to address their current shortcomings”, suggesting Mr Barnier carry out this task.

“I am sure that Mr Barnier could exercise a very productive assessment of Irish processes and procedures arising from Brexit and make relevant recommendations to address current challenges,” said Mr Drennan.

“Unless these shortcomings are addressed there will be serious disruptions to trade to and from Ireland.”

The commission was told by the group that it was “deeply frustrating” that despite the long lead-in to Brexit that the systems operated by the Irish authorities to manage post-Brexit trade are “not fit for purposes and are actually frustrating rather than facilitating trade.”

In the association’s letter to the Government, the group said that the approach being adopted by State agencies at Irish ports was creating “an unmitigated mess in the post-Brexit environment and fundamentally undermining Irish trade and commerce.”

Hauliers were experiencing “appalling examples of lack of coordination” by the Revenue , the Department of Agriculture and the HSE on checks on goods arriving in Dublin.

“Instead of adopting an approach aimed at facilitating trade, the Irish authorities seem intent on operating disjointed, duplicating, uncoordinated and excessive checks on goods arriving into Ireland,” Mr Drennan told the Taoiseach, Tánaiste and Minister Donohoe in the letter.

He told Government that hauliers were particularly concerned about the absence of any oversight or governance control over State agencies operating “within their own silos.”

While some businesses were not prepared for Brexit, the core problem is that State agencies are “operating systems, protocols and procedures that were not properly trialled before implementation,” the haulage group said, noting that the Revenue’s IT system has “collapsed twice under pressure.”