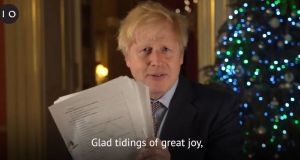 Screengrab taken from the twitter feed of @borisjohnson of the prime minister holding up a document on Christmas Eve believed to be the pages of the Brexit deal. Photograph: @borisjohnson/PA Wire

Boris Johnson has expressed confidence that even the most hardline Brexiteers among Conservative MPs will vote for his Brexit deal when it comes before the House of Commons on Wednesday. But his government warned businesses and citizens that they must prepare for new bureaucratic hurdles from January 1st if they are trading with or travelling to the European Union.

Mr Johnson said he was not worried about the verdict of a “star chamber” of lawyers appointed by the European Research Group (ERG) of Eurosceptic Conservatives to study the text of the agreement.

“I think it will survive the toughest, most ruthless scrutiny by the scholiasts of the Star Chamber, ” he told the Sunday Telegraph.

The British prime minister acknowledged that the deal did not go as far as he had hoped in offering access to British-based financial services firms to the European market. The European Commission will decide unilaterally in the coming days how much access City of London firms should have under a system known as equivalence but the chancellor of the exchequer, Rishi Sunak, said the deal offered the City a chance to do business differently.

“But this deal also provides reassurance because there’s a stable regulatory co-operative framework mentioned in the deal, which I think will give people that reassurance that we will remain in close dialogue with our European partners when it comes to things like equivalence decisions,” he said.

The British government has urged businesses and citizens to make their final preparations for the end of the post-Brexit transition on December 31st when new customs formalities will be introduced, despite the tariff-free, quota-free trade deal agreed on Christmas Eve. Exporters to the EU will have to make customs declarations and fulfil new marketing requirements and approvals.

Travellers to anywhere in the EU except Ireland have been urged to take out comprehensive travel insurance, check with their vet about pet passports and remember that they could face roaming charges.

“The nature of our new relationship with the EU – outside the single market and customs union – means that there are practical and procedural changes that businesses and citizens need to get ready for, and time to make these final preparations is very short. We know that there will be some disruption as we adjust to new ways of doing business with the EU, so it is vital that we all take the necessary action now,” cabinet office minister Michael Gove said.

Labour leader Keir Starmer is braced for frontbench resignations and a backbench revolt after he promised his party’s support for Mr Johnson’s deal on the basis that it was the only alternative to no deal. The Scottish National Party, the third largest party at Westminster, said on Sunday it will vote against the deal.

“With the Labour Party lining up behind Boris Johnson, it is clear Westminster will impose this hard Tory Brexit regardless of how Scotland votes but it is not being done in our name,” Ian Blackford, the party’s leader at Westminster, said.

“Scotland voted overwhelmingly to remain in the EU. The people of Scotland have a right to determine our own future as an independent European country – rather than suffer the long-term damage and decline of a hard Tory Brexit.”