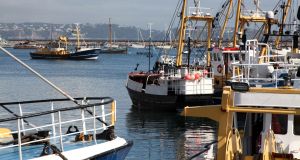 Britain had promised its own fleet of trawlers it would be able to catch more stocks after the country left the EU. Photograph: iStock

Britain is taking a “ridiculously simplistic” stance over fishing rights which is threatening to scupper a post-Brexit trade deal with the European Union, Minister for Foreign Affairs Simon Coveney has said.

The contentious issue over access to fish within territorial waters was one of “two major obstacles” to an agreement before the end of the Brexit transition period on December 31st, he said.

Britain had promised its own fleet of trawlers it would be able to catch more stocks after the country left the EU, but Mr Coveney warned against underestimating the strength of feeling on shared management of stocks, particularly among EU countries with an Atlantic coast.

Michel Barnier, the EU’s chief negotiator in the talks, spoke to eight different fisheries ministers across the bloc on Tuesday and has a “very tight” mandate to protect existing access for European boats in British waters, he added.

“These are shared stocks. They are not British fish or EU fish,” he told the Oireachtas joint committee on European Union Affairs.

“They are fish that swim between the two jurisdictions. To draw a line down the sea and say the fish on our side are our fish and on your side are yours is a ridiculously simplistic way to look at this.”

Citing mackerel as an example, Mr Coveney said most of the fish caught in Scottish waters are spawned and grow off the west coast of Ireland.

“Nobody owns this stock,” he said.

“This is a transitory species of fish that lives between our territories.”

Both sides in the negotiations had agreed that fishing rights would be settled ahead of a trade deal and that “clearly hasn’t happened”.

“The position on fishing has, if anything, hardened on both sides and the gap between what the UK government is promising on fishing, linked to the end of transition, and what the EU mandate is in terms of negotiations to deliver on fishing interests is really, really wide,” he said.

“So, I don’t believe the EU will finalise a future relationship agreement on trade without an agreement on fishing.”

A “landing zone” – or route to agreement – on fishing rights is “quite hard to envisage, quite frankly, right now”, he added.

The other key stumbling block to a deal within the next 90 days was Britain reneging on commitments in the Withdrawal Agreement to “level playing field provisions” – common rules to prevent businesses in one country gaining a competitive advantage over those operating in other countries.

The term seemed to be “toxic” in Westminster with Britain insisting it would simply have to be trusted over the issue rather than an agreed way of dealing with disputes, said Mr Coveney.

But Mr Barnier will refuse to move talks into a “more intensive phase” unless there is “a very clear signal” from London that it will show “some flexibility and realism on the need for fairness between the two economies”, he told TDs and senators.

One concern is the UK deregulating its own market for competitive advantage over EU states.

While there are other outstanding issues around the likes of financial services, judicial co-operation, data, haulage, the so-called land-bridge from Ireland through Britain to continental Europe, security and aviation, Mr Coveney said he could foresee “short terms contingency arrangements” being put in place for those if the two main stumbling blocks were overcome.

However, he said only a “very basic trade deal” is now the best case scenario for the outcome of talks with Britain on its future relationship with the EU.

“It is pretty clear at this stage that the best case scenario is to get a very basic trade deal, that avoids tariffs and quotas, but that would be a very significant achievement from an Irish perspective,” he added.

“It is quite clear that in many areas we aren’t going to get a permanent and comprehensive agreement on a future relationship, so the focus is on getting a core agreement on trade and what is required to do that.”