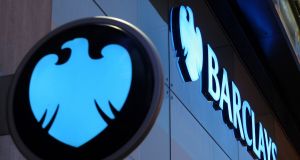 Barclays will allow customers in the Republic who have British bank accounts with the lender to continue to operate them after the Brexit transition period ends on December 31st. Photograph: Dominic Lipinski/PA Wire

Despite the imminent end of the Brexit transition period, customers based in the Republic will be able to keep their bank accounts open with most UK lenders after end of the year.

With the Brexit transition period concluding at the end of December, some British banks have written to their customers across the EU informing them that their bank accounts will be cancelled. This is because rather than simply passporting their services across the EU and European Economic Area as was possible up until now, banks are finding that they have to apply for country-specific licences in order to provide certain services.

From January 1st future co-operation between the EU and UK will likely be based on “equivalence”, whereby each regime recognises the other. This is not as comprehensive as passporting.

Lloyds Banking Group, which includes customers of both Halifax and Bank of Scotland, is understood to be closing retail accounts for some customers based in the EU. However, it’s understood that no Irish personal current account customer of the banking group will have their account closed.

Similarly, Barclays has written to expat customers in Italy, Estonia, Slovakia and Belgium to tell them that their savings and current accounts will have to be closed. However, a spokeswoman for the bank has confirmed that it has not asked Irish personal customers of Barclays to close their current accounts.

Should this change in the future, the spokeswoman said: “Where we make the decision to no longer offer products and services we are giving our customers as much notice as the local regulators allow, and where possible we are providing our customers with six months’ notice about the planned changes.”

Britian’s largest retail bank, HSBC, says that both UK expats and EU citizens living in the EU will still have access to a UK-based HSBC personal account as long as it shows activity at least once every 12 months.

The other Big Five UK banks – Ulster Bank parent NatWest (formerly Royal Bank of Scotland) and Santander – say they are monitoring the situation.

However, those with a credit card from Barclays, a Barclaycard, will find that they will no longer be able to hold onto this if they live in Ireland. According to the spokeswoman, customers were given until November 16th, 2020, to provide a UK residential address for their account; otherwise the account was closed.

Some financial services companies have changed how they are structured due to the impact of Brexit. Digital payments start-up Revolut, for example, recently moved Irish accounts from its UK e-money licence to a similar licence in Lithuania, from where it can passport into Ireland.