Boris Johnson has warned that unless there is a “fundamental change of approach” by the EU then Britain will end the transition period on January 1st with no trade deal. Video: Reuters 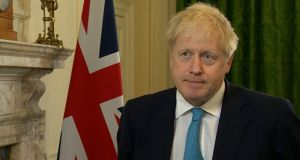 Boris Johnson has warned that unless there is a “fundamental change of approach” by the EU then Britain will end the transition period on January 1st with no trade deal.

Mr Johnson claimed that a European Council meeting in Brussels had left him convinced that the EU was not ready to offer the UK a “Canada-style” trade agreement.

In a dramatic televised clip, the UK’s prime minister said Britain would approach the prospect of leaving the EU without a trade deal – an “Australia-style” outcome – with “high hearts”.

Mr Johnson’s statement will be seen as an attempt to force a crisis in the negotiations with the EU, which remain deadlocked on the issue of fisheries and Britain’s subsidy regime.

He did not explicitly say he was walking away from talks, but said to the EU: “Only come to us if there is some fundamental change of approach.” He added that, in those circumstances, “of course we would be ready to listen”.

The pound fell 0.3 per cent against the euro after Mr Johnson’s statement at midday, in which he told businesses and travellers to prepare for a new relationship with the EU from January 1st with no trade deal in place.

In a bleak assessment of the state of negotiations, Mr Johnson said: “They want the continued ability to control our legislative freedoms and fisheries in a way that is completely unacceptable for an independent country.”

He said the EU summit in Brussels appeared to “completely rule out a Canada-style deal” and that he had concluded that the country should prepare for January 1st on principles “more like Australia’s”. Australia has no trade deal with the EU but is trying to negotiate one.

“For whatever reason after 45 years of membership they are not willing – unless there is a fundamental change of approach – to offer us the same terms as Canada,” he said.

“With high hearts and complete confidence we will prepare to embrace the alternative and we will prosper mightily,” Mr Johnson added. Britain would try to negotiate side deals to minimise disruption, he said.

Tory MPs have speculated for some time that Mr Johnson would need a “crisis” to bring negotiations with the EU to a head and that moment appears to have arrived.

However, most of the trade deal is now agreed and many senior officials in London and Brussels remain convinced that the negotiations are entering the final phase and that an agreement can still be struck. – Copyright The Financial Times Limited 2020