Businesses are downgrading their outlook for activity and jobs, says Bank of Ireland 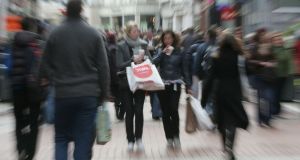 The threats of the pandemic and Brexit were to the fore, with the entire country moving to Level 3 of the State’s Covid-19 restrictions at the time of the survey. Photograph: Alan Betson

The twin threats of Brexit and Covid-19 drove a measure of the State’s economic wellbeing down by more than a quarter this month compared to the same time last year, while consumer sentiment fell to an all-time low.

The Bank of Ireland Economic Pulse came in at 56.6 in October. The index, which combines the results of the consumer and business pulses, was down 8.6 points on last month and 20.5 lower than a year ago.

The surveys are conducted by Ipsos MRBI on behalf of Bank of Ireland with 1,000 households and about 2,000 businesses on a range of topics including the economy, their financial situation, spending plans, house price expectations and business activity.

October marked a new low for consumer sentiment while businesses downgraded their near-term expectations for activity and jobs.

The threats of the pandemic and Brexit were to the fore this month, with the entire country moving to Level 3 of the State’s Covid-19 restrictions when the survey was conducted (before later moving to Level 5), while tensions between the UK and EU over future trading arrangements were coming to a head.

Bank of Ireland said mounting speculation that the rise in virus cases would necessitate the imposition of further restrictions added to the air of anxiety, knocking confidence among households and firms.

Bank of Ireland group chief economist Dr Loretta O’Sullivan said: “The economic pulse dropped sharply in October, with both consumer and business confidence well down on the month. This is disappointing but not surprising given the backdrop to this month’s survey.

“Heightened Covid and Brexit uncertainty saw households and firms pare back their expectations for the economy, business activity and jobs and with Level-5 restrictions now imposed, the growth outlook for the fourth quarter of the year is challenging.”

The business pulse stood at 58.6 in October, down 9.6 on last month and 20.2 lower than a year ago. While Budget 2021 included additional supports for firms, Covid-19 and Brexit-related uncertainty weighed on the mood.

All four sectoral pulses posted weaker readings this month, with the services pulse seeing the biggest drop amid further restrictions on social interactions and the hospitality sector.

Businesses in the latter were extremely downbeat about prospects for activity in the next three months.

The survey also looked at growth ambitions over the medium term. The results show that 56 per cent of firms are planning on expanding in the next one to three years, slightly below the pre-pandemic figure of three in five in January. Just over one in 10 intends to scale down, which is up from about 8 per cent.

Households took a more pessimistic view of prospects for the economy and jobs this month as public-health-related restrictions were tightened and fears of a no-deal Brexit increased.

A fifth of households considered it a good time to purchase big ticket items (down from a quarter), whereas four in five considered it an appropriate time to save (up from 75 per cent).

On housing, 35 per cent expect prices to increase in the next 12 months. With households in Dublin, the rest of Leinster and Munster a little more positive about the outlook for house prices, the housing pulse ticked up to 64.8 in October 2020. This was two points higher than last month’s reading but down 8.5 on a year ago.

This month’s survey also finds that one in 10 is planning on buying or building a home over the coming year, and that three in four think it is cheaper to buy than rent in their area.