Diplomats updated on agreement by Michel Barnier on Christmas Day 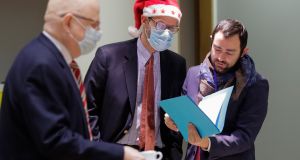 Ambassadors from the 27 European Union members were briefed on the contents of the Brexit trade deal on Christmas Day.

The diplomats were being updated on the historic deal by Michel Barnier, who led Brussels’ negotiating team in the talks with the UK.

British prime minister Boris Johnson has hailed the deal struck with the EU as a “new beginning” for Britain that resolves the European question that has “bedevilled” British politics for generations.

But fishing leaders claimed Mr Johnson had sacrificed the industry to secure a trade agreement, while British Labour leader Sir Keir Starmer branded the accord “thin” — although his party will back it in next week’s Commons vote because the alternative would be a “devastating” no-deal scenario.

Late haggling over the deal meant it was not concluded until Christmas Eve, days before current trading arrangements expire at the end of December.

The timing of the deal has forced politicians and officials in the UK and Brussels to tear up Christmas plans.

The 27 European Union members still have to back the deal, which was thrashed out by officials from the European Commission with the UK.

MPs and peers will be called back to Westminster on December 30 to vote on the deal, but MEPs are not expected to approve it until the new year, meaning it will have to apply provisionally until they give it the green light.

Sebastian Fischer, a spokesman for the German presidency of the Council of the EU, joked that he was looking forward to the diplomats’ meeting “because nothing is more fun than to celebrate Christmas among socially distanced colleagues”.

“Thank you Brexit,” he said, perhaps underlining the EU’s desire to move on from the issue.

French Europe minister Clement Beaune said it was a “good agreement” and stressed the EU had not accepted a deal “at all costs”.

He told broadcaster Europe 1 “we needed an agreement less than the British” as “for them, it was a vital need”.

Mr Beaune said British food and industrial products entering the European single market after January 1st will not pay customs duties “but will have to meet all our standards”.

“There is no country in the world that will be subject to as many export rules to us as the UK,” he said.

Mr Johnson used his Christmas message to sell the deal to a public weary of Brexit after years of sometimes acrimonious wrangling since the 2016 referendum.

Brandishing a sheaf of papers he said: “I have a small present for anyone who may be looking for something to read in that sleepy post-Christmas lunch moment, and here it is, tidings, glad tidings of great joy, because this is a deal.

“A deal to give certainty to business, travellers and all investors in our country from January 1st. A deal with our friends and partners in the EU.”

Mr Johnson said the document “will be the basis of a happy and successful and stable partnership with our friends in the EU for years to come”.

The prime minister has claimed the deal meets the goals set out during the 2016 campaign to “take back control”.

At a Downing Street press conference on Christmas Eve, Mr Johnson said “as a result of this deal be able to catch and eat quite prodigious quantities of extra fish”, with £100 million for the industry to modernise and expand.

But Barrie Deas, chief executive of the British National Federation of Fishermen’s Organisations, said there will be “frustration and anger” across the industry, telling the PA news agency: “In the end it was clear that Boris Johnson wanted an overall trade deal and was willing to sacrifice fishing.” – PA