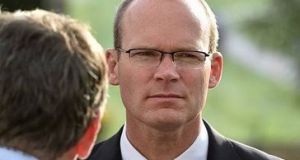 Minister for Foreign Affairs Simon Coveney: he is also travelling to Brussels next week for meetings with EU foreign ministers

Taoiseach Micheál Martin will join fellow EU leaders for discussions on Brexit next week when they gather in Brussels for a special European Council meeting.

Brexit was added to the agenda of the meeting on Friday, and EU officials said the leaders would have the opportunity to “briefly analyse” the current situation.

The leaders are expected to discuss the prospects for a trade agreement with the British government, the EU’s response to recent moves in London to abandon parts of the withdrawal treaty and the preparations for a no-deal outcome at the end of the year.

Leaders will also discuss the single market, industrial policy and digital transformation, as well as external relations, in particular relations with Turkey and with China, officials said, in an indication that the EU is anxious to get on with non-Brexit business.

There is a strong feeling in Brussels that Brexit has taken up too much of the EU’s attention in recent years, often dominating summits to the exclusion of other topics.

The summit will also be an opportunity to take stock of the status of the Covid-19 pandemic, officials added.

Charles Michel, who heads the EU Council of national leaders, met with chief Brexit negotiator Michel Barnier on Friday to discuss the state of the talks.

Officials said the two men agreed the need “to fully implement the withdrawal agreement”. There was “no question about it”, they said.

“The EU is neither intimidated nor impressed but breaking [an] international agreement is extremely worrying.”

The summit comes as the Brexit process reaches a critical stage. The final round of negotiations between EU and UK teams on a possible future trade agreement is scheduled to start the following week, though EU sources said on Friday night they expected further rounds as there was little hope of agreement by then.

The EU will also watch next week’s events in the House of Commons closely, when MPs consider amendments to the Internal Market Bill tabled last week.

It is understood that informal contacts between the two sides have continued this week with “limited but helpful progress”.

Minister for Foreign Affairs Simon Coveney is also travelling to Brussels next week for meetings with EU foreign ministers. He will meet Mr Barnier for discussions on the Brexit talks.

In Dublin, according to three senior officials who spoke on condition of anonymity, there is a belief the UK will want a trade deal and will be willing to make compromises to achieve its objective.

Dublin’s initial view that the move against the withdrawal agreement was part of a tactic to prepare for the negotiations – “sabre-rattling” in the words of several officials at the time – has strengthened this week.

One source suggested London had been “licking its wounds” in recent days, especially in the wake of the frosty reception from senior politicians in Washington to the British plans despite a visit there by UK foreign secretary Dominic Raab this week.

However, officials also stress the difficulties in concluding a deal, citing the uncertain direction at the top of the British government and the extent to which trust has been damaged by the events of recent weeks.

“The path to a deal is very narrow,” said one source, “but it is also very clear.”