DUP leader Arlene Foster has said that Taoiseach Leo Varadkar needs to "dial down the rhetoric" over Brexit, adding that she believes a Brexit deal can be reached. Video: Reuters 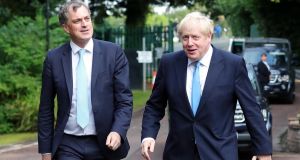 British prime minister Boris Johnson has told the Northern Ireland parties that he was determined to have Stormont reinstated.

He also said, on his first prime ministerial visit to the North on Wednesday, that the UK would leave the European Union on October 31st “come what may”.

Mr Johnson, who did not give a press conference, was criticised by a number of the parties for holding a private dinner with DUP members including party leader Arlene Foster at the Culloden Hotel in Belfast on Tuesday. It was claimed that he could not act impartially because of his dependence on the DUP to sustain his Conservative government in Westminster.

Before meeting the parties, Mr Johnson insisted he would act in a non-partisan manner. He told Sky News: “It’s all there in the Good Friday agreement; we believe in complete impartiality and that’s what we’re going to observe.”

On Wednesday evening, a spokeswoman for Mr Johnson said “the overarching purpose of these meetings was to discuss moving forward in the ongoing power sharing talks and getting the Northern Irish democratic institutions back up and running as soon as possible”.

“The prime minister told all of the parties that he was determined to bring this process to a successful conclusion and that he would do everything he could to make it happen,” she said.

She said the discussions also included Brexit “where the prime minister made clear that the UK would be leaving the EU on October 31st come what may, and restated his intention to do so with a deal”.

She said that the British government was “steadfast in its commitment” to the Belfast Agreement and that “in no circumstances would there be physical checks or infrastructure on the Border”.

DUP leader Arlene Foster called on Taoiseach Leo Varadkar to “dial down the rhetoric” on Brexit after her party met Mr Johnson.

Ms Foster said a Brexit solution could be found that met the concerns of the European Union and of the British and Irish governments.

Ms Foster also was dismissive of Sinn Féin calls for a referendum on Irish unity. She said: “The prime minister reiterated the fact that he would never be neutral on the union. We welcome that… And talk of a Border poll, he told us, is something that he would never entertain.”

Sinn Féin leader Mary Lou McDonald said after her party’s meeting with the prime minister that she told him the “ongoing indulgence of the DUP and rejectionist unionism has got to stop”.

“He tells us that he will act with absolute impartiality. We told him nobody believes that,” she said.

“We have told him that the confidence-and-supply agreement between the Tories and the DUP poisoned the ground water politically, and made it very, very, very difficult to sustain a negotiation, much less to land on a conclusion or an agreement,” added Ms McDonald.

The SDLP deputy leader Nichola Mallon said her party delegation had a “blunt” engagement with Mr Johnson. “We went into this meeting concerned that he would have a limited understanding of the complexities and fragility of this place and those concerns have been confirmed,” she said.

“It is very clear that he views and understands the situation through the eyes of the DUP,” she added.

Ms Mallon said that in absence of devolved institutions in the North and in the event of a no-deal Brexit that the British and Irish governments should make immediate preparations for British-Irish “joint authority” over Northern Ireland.

The Ulster Unionist Party leader Robin Swann told Mr Johnson that while his party opposed the backstop it also wanted the prime minister to avoid a no-deal Brexit.

Mr Swann said he also raised the issue of the past and the UUP’s opposition to “vexatious claims” against former RUC officers and British soldiers. He said that Mr Johnson told him he would “defend the security services who served here in Northern Ireland”.

Alliance leader Naomi Long said she made it very clear to Mr Johnson at their “frank and candid” meeting that the “impact of Brexit on the talks here is palpable, it is having a destabilising effect, as would any no-deal Brexit”.

“I don’t know if the prime minister has a plan; if he does he certainly disguises it well, but I hope that if he does not have a plan today that he goes home tonight fully aware of the need to get one, and get one fast,” she said

A protest was held at the Carson statue on the Stormont estate by Harland & Wolff workers and union representatives who are seeking support from the British government to prevent the threatened closure of the yard. They handed in a letter urging the nationalisation of the yard which a Northern Ireland Office official said would be given to Mr Johnson.

After getting translation advice from some of the Irish language protesters the Harland & Wolff group chanted in English and Irish, “Save our yard”, and “Sabháil ár gclós”.

DUP leader Ms Foster said her party was working with Mr Johnson to try to assist Harland & Wolff and also Wrightbus in Ballymena.