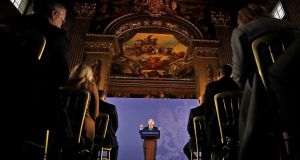 Boris Johnson’s choice of the Painted Hall in the Old Royal Naval College in Greenwich was a statement in itself as he sought to frame the next stage of Britain’s negotiations with the European Union on Monday. James Thornhill’s great painting on the ceiling shows William and Mary enthroned at the centre of a pageant of symbols of Britain’s power and stability, a scene Johnson described as “gorgeous and slightly bonkers”.

The prime minister opened with a paean to free trade, accusing Brussels, Washington and Beijing of protectionism and mercantilism and portraying himself as the champion of “the right of the populations of the earth to buy and sell freely among each other”. But his main purpose was to lay out his opening position in talks about Britain’s future relationship with the EU, particularly on trade.

He said that Britain would not engage in a race to the bottom on regulation and claimed that British standards were higher than most EU member states in areas like labour rights, animal welfare and action against climate change. Britain would continue to maintain high standards but there was, he said, no need to put a commitment to do so into a treaty.

“We want a comprehensive free trade agreement, similar to Canada’s. But in the very unlikely event that we do not succeed, then our trade will have to be based on our existing withdrawal agreement with the EU,” he said.

The EU insists that Britain must sign up to a “level playing field” on everything from state aid and taxation to environmental and social rights if it wants a free trade agreement. Downing Street said after Johnson’s speech that the idea of a level playing field “is an EU concept, it’s not a generally accepted one”. But the term appears in the political declaration attached to the withdrawal agreement Johnson negotiated last year.

If Johnson’s rhetoric sounded hardline, he left himself some wriggle room for compromise with Brussels, which is not seeking regulatory alignment or, apart from the area of state aid, for Britain to adopt new EU rules. Even on fisheries, he is open to an agreement, although he insists that it should be renegotiated every year whereas the EU wants a more durable arrangement that would give its fishermen the access to British waters they enjoy today.

The swagger on display in Greenwich had echoes of Theresa May’s bravado in Lancaster House at the start of the Brexit negotiations and it is likely to prove just as ineffective when the talks get under way next month.

Phil Hogan concerned at decreasing focus on Brexit in Ireland