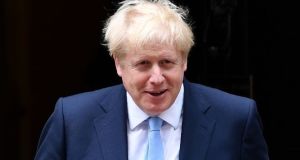 The latest indications from London of the kind of Brexit Boris Johnson wants to aim for has big implications for the economy on this island. Photograph: Daniel Leal-Olivas/AFP/Getty Images

The decision on when to hold the general election here is being framed, at least in part, by Brexit and by what is happening in Northern Ireland.

Developments on both fronts could help to clear the way for an early election, though this still seems to hang in the balance. But whenever the next Irish government is elected, Brexit and Northern Ireland will remain dominant issues – and they are hugely interrelated.

There are big implications for our trade with Britain, for sectors like food and engineering and particularly for rural Ireland

The latest indications from London of the kind of Brexit Boris Johnson wants to aim for have big implications for the economy on this island. The RIC commemoration row may have underlined the remaining cultural divisions and the historical sensitivities. But economically, the Boris version of Brexit could push the two parts of Ireland closer together.

All the signs so far are that Johnson meant what he said about Brexit during the election campaign – he wants to use the opportunity to diverge from EU rules and regulations and may be willing to pay the price. The cost, economically, to the United Kingdom is that its businesses will have significantly less free access to EU markets than currently exists.

I still wonder if an economic backlash as the scale of the threat to jobs becomes clear will lead to some change in direction. EU negotiators will also not let the UK have it both ways – to maintain free access, the UK must continue to play by a lot of the rules.

And there are real questions, too, about the viability of the current rhetoric of the UK “setting its own rules”. Experts point out that this may simply be impossible in a world where regulations tend to be set by the big trading blocs – the EU, US and China. The economic cost and the sheer impracticality of this may in time have an impact on policy.

There are big implications for our trade with Britain, for sectors like food and engineering and particularly for rural Ireland. But this will also shape North-South relations, because in getting his Brexit deal, Johnson ditched the DUP and agreed to a trade border down the Irish Sea. And if the UK does diverge significantly from EU rules, then this could be a hardish Irish Sea border.

The North’s businesses are worried about this and so are its politicians. The new Stormont deal includes a commitment to introduce legislation to allow firms in the North to continue to have free access to markets in the rest of the UK. A proposed amendment from the North’s politicians to the withdrawal agreement along these lines had been voted down. But now the UK is committed to it.

How the proposed border down the Irish Sea will work in practice is not yet clear and is to be worked on in a new joint EU/UK committee into which the North’s politicians will have an input. New bureaucracy and checks will certainly face goods coming the other direction – from Britain to the North. And even for goods moving from the North to Britain, it remains to be seen exactly how it will work.

The more the UK diverges from EU rules and regulations, the more complex the Irish Sea border will be to work – and the more important it will be that it does operate effectively.

Minister for Finance Paschal Donohoe said in a speech last year that if the UK does pursue a policy of divergence, “there are very profound implications for the protection of the single market on this island, which constitutes the UK’s sole land border with the EU”.

This is not just bureaucracy – it is ensuring, for example, that products entering from the UK meet EU food and product safety standards and that cattle and other animals are properly checked. The more the UK diverges – and the more it imports products from other countries like the US under new deals – the more complicated this will be.

For the Republic, it is vital the EU accepts that the controls are operating and protecting the EU single market, because otherwise we will be back to worrying about checks at the Irish Border, or more likely on goods leaving Irish ports for continental markets. And the new arrangements – including complex tariff collect and refund measures – have to be ready to go in a year’s time, because for now Johnson insists that the standstill transition period, due to end on December 31st, will not be extended.

There is a wider economic dimension here, too. If the British economy diverges from EU rules and the North stays aligned to the EU trading bloc – as it will under the new deal in many areas – then the North’s economy will become increasingly closer to the Republic’s in terms of rules, regulations and practices than to the rest of the UK.

It may not be a perfect deal for the North – and it would be better if the UK remained more closely aligned with the EU. But Brexit was never going to be perfect and as well as issues, problems and headaches, it surely also brings new opportunities.

It would put the North in a unique position, aligned to the Republic, part of the UK and with one foot in the EU. The “price” – for those who see it as such – is following many rules set in Brussels. And also a vital part of the story, of course, is the significant ongoing support from the UK exchequer.

We can argue about whether and when a Border poll might happen, but the current path of Brexit points towards the emergence of something akin to a single economic area or zone on the island. I don’t know where this leads politically, but it is surely important.