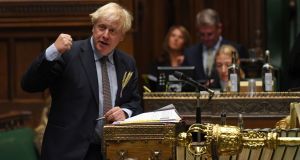 British prime minister Boris Johnson has defended his decision to introduce a Bill that would break international law, telling MPs it is necessary to protect Britain against “extreme or irrational interpretations” of the Northern Ireland protocol in the withdrawal agreement with the EU.

The UK Internal Market Bill gives British ministers the power to decide unilaterally how parts of the protocol should be implemented and disapplies parts of the withdrawal agreement the British prime minister negotiated with the EU last year.

The Bill states that its provisions should have effect “notwithstanding any relevant international or domestic law with which they may be incompatible or inconsistent”. Northern Ireland Secretary Brandon Lewis admitted in the House of Commons on Tuesday that the legislation would break international law “in a very specific and limited way”.

Mr Johnson told MPs during prime minister’s questions in the House of Commons on Wednesday that the Bill was designed to protect peace in Northern Ireland.

“My job is to uphold the integrity of the UK, but also to protect the Northern Irish peace process and the Good Friday Agreement [Belfast Agreement]. To do that, we need a legal safety net to protect our country against extreme or irrational interpretations of the protocol that could lead to a border down the Irish sea in a way that I believe, and I think members around the House believe, would be prejudicial to the interests of the Good Friday Agreement and prejudicial to the interests of peace in our country. That has to be our priority,” he said.

John Major on Wednesday became the second former Conservative prime minister to warn the government about the consequences of this action, after Theresa May did so before the Bill was published.

“For generations, Britain’s word – solemnly given – has been accepted by friend and foe. Our signature on any treaty or agreement has been sacrosanct. Over the last century, as our military strength has dwindled, our word has retained its power. If we lose our reputation for honouring the promises we make, we will have lost something beyond price that may never be regained,” he said.

Downing Street welcomed European Commission vice-president Maros Sefcovic’s call for a special meeting of the EU-UK joint committee to discuss the British move. And Mr Johnson’s official spokesman suggested that the legislation was necessary because the Northern Ireland protocol had been negotiated in a hurry.

“It contains ambiguities and in key areas there is a lack of clarity. It was written on the assumption that subsequent agreements to clarify these aspects could be reached between us and the EU on the detail.”

The British government on Wednesday published its plans for a new approach to controlling public subsidies to business after the end of the Brexit transition period.

It promises to follow World Trade Organisation subsidy rules which are much looser than the EU’s state aid regime, but also to adhere to “any international obligations on subsidies agreed under future free trade agreements”.