Battles over food, mobility and residence turn international at Border and in sea 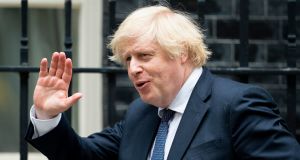 British prime minister Boris Johnson: For 40 years, British food standards have been aligned with Europe’s. They are higher than US ones and based on the precautionary principle. Photograph: Will Oliver

Agriculture and food are key strategic issues in the high politics of world trade. This puts Ireland North and South at the centre of current negotiating outcomes on Brexit and transatlantic relations.

Regulatory alignment between the UK and the EU on agriculture and food trade is a central question in the more intensive talks now under way in Brussels. British negotiators highlight regained sovereignty as they resist future alignment with EU standards; simultaneously the United States demands the UK accepts agriculture and food imports from there as the price of a trade deal to compensate for loss of EU membership.

Those alternatives pose a fateful choice for British political leaders, consumers and farmers. For 40 years British food standards have been aligned with Europe’s. They are higher than US ones and based on the precautionary not risk principle. Assuming the real political agenda and logic of Brexit is to Americanise its economy and downscale its welfare state, it is clear which way this should go. But that direction comes up against strong opposition from a broad range of British interests.

The conflict plays out between the UK trade and environment departments over a commission on standards, in the Conservative party between farming and free trade advocates, and in online petitions and large supermarket declarations rejecting US chlorinated chicken and genetically modified agricultural goods. It recalls historic divisions within the Tories over abolition of the corn laws in 1846 and imperial protection 50 years later. Boris Johnson’s government has to balance these interests with the working-class vote that gave him victory over Labour last December, which supposedly favours cheaper US food.

The real everyday impact of Brexit thus comes through to British citizens in these battles over food standards, just as over continental mobility and residence rights. Brexit outcomes will be determined in good part by how they are perceived and resolved in forthcoming domestic politics.

Inside Politics · Brexit: what's the latest and will there be a deal?

That politics becomes international at the Irish Border and in the Irish Sea. The Protocol on Northern Ireland attached to and part of the Withdrawal Agreement treaty specifies that the North will remain part of the UK customs regime but will operate EU standards and trade rules to avoid reimposing a border on this island. The treaty comprehensively underwrites the 1998 agreement, creates a system of joint EU-UK committees to implement the trade rules and provides for a vote by the Northern Ireland assembly on whether the arrangements should continue after four years.

The UK customs service has confirmed the paperwork required to control trade from Britain to Northern Ireland and infrastructural work is to proceed in Larne and elsewhere to implement it – despite earlier denials by Johnson. Northern Ireland business interests and now the new Irish Government demand clarity and insist on the need to prepare.

The timing is extremely tight and increasingly perilous for ardent Brexiteers. If major compromises are not agreed this month, the UK chief negotiator will have left for a new security job in 10 Downing Street by September. Angela Merkel says the incoming German EU presidency cannot let the UK cherrypick access to its markets as if they had not left. The US chief trade negotiator says a US-UK trade deal cannot be concluded by November – perhaps after Trump’s defeat. The powerful agricultural and food lobbies in the US Congress would not agree one excluding access for its products, which they see as a battering ram to open more important EU markets. Nor would the Irish congressional lobby allow one that created an internal Irish border.

Ireland is nevertheless being weaponised by London in the Brexit negotiations. The threat of a no-deal Brexit puts pressure on Ireland because reversion to world trade rules would put 57 per cent UK tariffs on Irish beef exports to the UK, where 40 per cent of output goes.

A more radical no-deal involving non-implementation of the Northern Ireland protocol would force Ireland and the EU to defend the single market on the Irish Border. For how long would EU solidarity last then? Could the UK’s consequent loss of international trust and credibility outlast that?

Such malign scenarios need to be explored, however unfavourable or unlikely they seem. There are huge potential costs for the UK as well as for Ireland and the EU.

If those driving EU Brexit policy believe these costs are worthwhile to make their desired transition, Ireland would become the geopolitical border between such new Anglo-American and Eurasian varieties of capitalism.