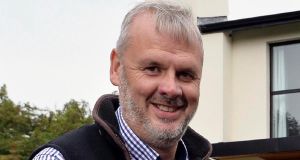 Macrete Ireland director Richard Hogg: ‘It is difficult to prepare for something when we don’t know what it will look like.’

Richard Hogg is a director of Macrete Ireland, the precast concrete company, which has played a key role in the development of some of the UK biggest sports stadiums in recent years including Tottenham Hotspur’s football stadium and the home of Brighton & Hove Albion Football Club.

He is also a director of Precision Gear Services, an engineering company which specialises in wind turbine and industrial gear boxes. Both companies are based in Toomebridge in Co Antrim and employ about 200 people.

Mr Hogg is also a board member of the industry group, Manufacturing NI.

Shock and despair. I didn’t think we would leave because I thought people understood the benefits of being part of the EU. While it is not perfect by any means, I believe the UK’s deal with the EU wasn’t too bad, and not just because of the access it gives us to European markets, so I was pretty shocked by the Leave result.

We are already feeling the effect with customers from the EU questioning if they will have to pay tariffs in the event of a no deal and with one customer removing goods.

We are dealing with lots of deep questions and in-depth queries that we have never had to deal with before because our customers want to know what will happen after the end of the year.

It is difficult to prepare for something when we don’t know what it will look like. Everyone is saying get ready for Brexit but what are we getting ready for?

I’ve been to lots of meetings about Brexit, I have met with lots of different people from government to professional organisations and nobody has ever been able to say to me this is what Brexit will look like.

People and organisations will happily tell you, for example, to deal with “three scenarios” to get Brexit-ready. Then next they will tell you that the number one scenario is likely to cost you £50,000, number two could cost another £50,000 and so could number three which means you are looking at spending £150,000 and for what – is that just going to be wasted money?

It is very easy for some people and politicians to sit there and say you should be getting ready for Brexit but at the end of the day when you are running a business and you are employing people. You need certainty – you need to know exactly what it is you are preparing for and we don’t know that yet and nobody seems to be able to tell us what Brexit will look like.

In the meantime we just have to get on with running our businesses. Depending on the outcome and whatever Brexit finally delivers, we may have to look at relocating some of our operation to the EU.

We are really just looking very closely at our supply chain and keeping in contact with our suppliers, I am due to go to Germany to visit one. Many of our suppliers are in the EU and many of our customers are also in Europe on the Precision Gear Services side of our business.

If there are significant changes to trading with the EU after Brexit that could be a problem for us, if, for example, we are doing business in southern Italy the paperwork is already notoriously difficult. After we are out of the customs union, this will add another layer of complexity to doing business in Europe and could make us less competitive.

One of the key advantages for Precision Gear Services at this time is that we are a small company that can move fast. But if there were to be any hold ups at customs in the future or extra layers of paperwork to deal with, that would just give our competitors an opportunity to step over the top of us. And we are talking about the big guys in the industry here: they would love to see that happening. It would be perfect for them.

There are no advantages whatsoever from Brexit for the business and, if there is no deal, it is not going to be good for anyone. I don’t believe that the world trade option would be as good as what we have now. I think what will happen is that we will just end up paying more for everything.

The best case scenario is that we get a deal and the worst case is we leave without a deal. We need a deal of some sorts because, God forbid, if there is no deal that would be a disaster for all of us. My gut feeling is that we will get a deal of some sorts because I think even the hard Brexiteers, including the DUP, realise they need to come up with something at this stage.

If they could guarantee easy movement of goods.

I think they are in a difficult no-win situation and have made the best of a bad situation. I think both parties have a lot to answer for. I would like to make one positive point about the Brexit negotiations and it is this – throughout it all, the business and farming bodies in Northern Ireland have come together and been united in their message to government that we absolutely need a deal. It is not very often we come together as one voice, it is pretty unique because normally we are all looking for different things, but when it comes as Brexit, we are united and I think it is very unhelpful if politicians ignore that.

I have no idea. We will have to take it as it comes.