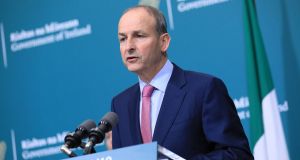 The Taoiseach travels to Brussels on Thursday to attend a special meeting of the European Council. Photograph: Julien Behal/PA Wire

Taoiseach Micheál Martin will share his assessment of Brexit developments with other European leaders later on Thursday.

He has previously said the Irish Government was preparing its latest Budget on the basis of a no-deal Brexit.

He recently told the UK Liberal Democrats’ conference that he was “not that optimistic” of a future free trade agreement being reached between the UK and the EU.

On Thursday, Mr Martin said: “I look forward to joining colleagues in Brussels this week. When we met in July, we agreed an unprecedented €1.8 trillion package to support Europe’s economic recovery.

“If we are to see the full benefit of that package, we need to maximise the potential of the Single Market, including building our collective digital capacity, economic resilience and competitiveness.

“This is all the more important in the context of the economic disruption of both Covid-19 and Brexit.”

His spokesman said he would update fellow EU state leaders with his thoughts on Brexit developments.

He travels to Brussels to attend a special meeting of the European Council on Thursday.

The Taoiseach will hold a bilateral meeting with European Commission president Ursula von der Leyen and attend the Renew Europe working lunch with other EU leaders ahead of the Council summit.

Participants will discuss how to deepen and strengthen the Single Market as a key tool to drive Europe’s economic recovery.

It will also consider how to improve the competitiveness of European industry.

Mr Martin’s spokesperson said: “The European Council will be briefed on the latest state of play in the Brexit negotiations which are continuing this week, and the Taoiseach will take the opportunity to share his assessment of recent developments with fellow leaders.” – PA