One month from Brexit, Martin sees ‘landing zone’ for a deal and reset in agenda with UK 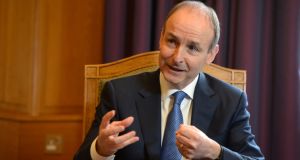 Taoiseach Micheál Martin is confident a deal can be done, but says getting there will be challenging. Photograph: Dara MacDónaill

Where fish spawn and are caught is not the type of discussion you would expect between Taoiseach Micheál Martin and UK prime minister Boris Johnson, but this is where the Brexit “endgame” has landed.

As the clock ticks down to the UK’s effective exit on January 1st, Martin spoke to Johnson on Friday evening about the challenge around finalising a EU-UK trade deal on fishing and the level-playing-field competition issues, the final two points stalling an agreement.

“I have pointed out to [the] British prime minister this idea of dividing lines across the seas and saying, ‘this is our fish and that’s your fish’ – I mean, the seas don’t operate like that,” he says.

Speaking one month before Brexit comes into effect, the Taoiseach says that “unfortunately” fishing has, for the UK, become a “totemic issue” linked to sovereignty and control of waters.

He believes “a practical, common sense approach” is required here to finalise an agreement.

Many fish spawn in Irish waters and are caught at their most valuable stage after migrating north to UK waters. As Martin sees it, Britain and Ireland share fish stocks “so we have to be sensible about it”.

EU and UK negotiators are still far apart on reaching agreement on fishing access to UK waters in return for United Kingdom access to other European Union markets, but Martin believes a deal can be done this week.

In an interview with The Irish Times in his office in Government Buildings, Martin says there are “mechanisms” to resolve issues around access to UK waters and Britain has said that it “would be generous in terms of the allocation if certain principles can be agreed”.

“We are now really in the endgame if a deal is to be arrived at this week,” he says, though he acknowledges Johnson’s Covid-19 restrictions could create political difficulties at home this week.

The Taoiseach is confident that a deal can be done but says it will be challenging getting there. He takes “solace” from the fact there are legal texts on all the issues before negotiators.

Martin is not contemplating EU compensation funds or financial packages for the fishing or other industries just yet while there is still a chance of a deal being struck.

“It’s fish we want, not money. It is the ability to fish, and to retain our quotas and the capacity of our fishermen to fish that are a key priority,” he says.

Concerned about the failure of small businesses to prepare for Brexit and the flood of new customs declarations required for shipping goods to, from and through Britain, Martin says that even with a “benign Brexit” there will be “very significant” change in the levels of bureaucracy.

“It will be a very significant burden on business and there will be delays in the beginning – I anticipate delays in January, February at our ports,” he says.

“The objective of all of our agencies is to make it as smooth as we possibly can and I think that the delays are probably more likely on the food side more than the others.”

The Covid-19 pandemic, four years of the “Brexit story” with “various chapters” and a feeling that “it will be all right on the night” has left some companies unprepared, says Martin. His message to them is “to get ready” for the millions of customs declarations required for trade with Britain from January.

“That will be of a far higher order than anything you have experienced before,” he says.

Worried about potential delays at Dublin Port, Martin notes discussions between the port authorities and shipping companies to see if ferry arrivals can be staggered to avoid logjams.

“It’s going to make for a difficult change for people. It will take a while to work out,” he says.

If a trade deal is agreed, the EU and UK may be able to show flexibility to ease the enforcement of EU rules with food and animal health checks at borders early next year.

“People may be in a different frame of mind in terms of cutting people slack in terms of protecting the single market and all of that,” he says.

The Taoiseach is not nervous heading into January but hopeful there will be a deal because of the economic damage from a no-deal Brexit.

“A no-deal on top of Covid would be very serious for the economy, for the regions, and for the agri-food industry in particular at the Border counties,” he says.

He hopes for a good deal to “reset” the agenda and pave the way for a new strategic relationship between Ireland and Britain.

“It has to be anchored well and strongly into the future. I’m very concerned about that. I don’t want Brexit to undermine that relationship,” he says.

And with Covid-19 vaccines on horizon to escape “this Covid stranglehold”, Martin says he is looking forward to 2021 “more in hope than in nervousness”.