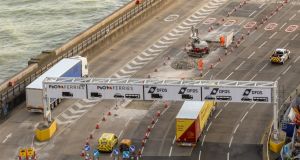 Revenue has written to 90,000 business which had not registered for an economic operators registration and identification number. This is a requirement for post-Brexit trade with Britain. File photograph: Getty

Businesses risk losing out to competitors and could even struggle to survive if they do not prepare for new post-Brexit customs procedures from next month, according to a senior Revenue official.

Lynda Slattery, head of the Revenue’s Brexit policy unit, expressed concerns that some firms, particularly in the construction and farming sector, are unprepared for Brexit and had not registered for the customs numbers to continue trading with Britain beyond January 1st.

Being prepared for Brexit customs could create a competitive advantage for some firms whose supply of goods are not disrupted by delays at British borders due to being unprepared, she said.

“If you are not ready and a competitor is, you may lose out, you may lose contracts or business to them. That is absolutely the reality,” she said.

Ms Slattery said that business survival could also become a factor if companies that depend on supplies from the UK are not prepared for Brexit.

“That is really in the hands of businesses and what they do in the next couple of weeks,” she said.

The Revenue official said she was “genuinely surprised” at the lack of preparations by some firms with many wrongly believing that a trade deal brokered between the EU and the UK before the end of the year would avoid them having to prepare for customs procedures from January 1st.

In September, the Revenue wrote to 90,000 business which had not registered for an economic operators registration and identification (EORI) number. This is a requirement for post-Brexit trade with Britain and the Revenue followed up with phone calls to more than 14,000 businesses.

“We were critically aware that these businesses could be seriously in trouble in January,” she said. “Some actually believed Brexit still wasn’t going to happen and a number of businesses came back with that belief that they were still connecting the fact that negotiations were still ongoing and that there was a possibility that there wouldn’t be a requirement.”

She doubts that the distraction of the Covid-19 pandemic explains all of the delays in businesses engaging, though it could explain some of the lack of preparation.

Since the letters were sent out, just 4,500 businesses have registered for customs.

The EORI number is the first step in the process to prepare for customs procedures with Britain after it becomes a non-EU “third country” once Brexit comes into effect with the end of the standstill transition period at the end of the year, regardless of the outcome of the trade talks.

Ms Slattery said that customs procures will apply once Britain’s departure from the EU customs union and single market comes into effect at the end of the transition period on December 31st.

“If they don’t engage, they are going to find that they have placed an order and the goods won’t be moving anywhere and they will be scrambling to catch up,” she said.

Ms Slattery said firms will be asked for a “pre-boarding notification” at ferry check-ins in Britain to show they have declared goods for customs in advance and, if they have not, they will be asked to leave the port, resulting in at least days-long delays for their goods to ship.

Revenue has seen some evidence of businesses stockpiling goods so if they have not prepared for customs, it may not become an issue until later in January or February.

“It all depends on what their supply model is like. If businesses don’t prepare and have the capacity to engage with customs, their goods won’t move,” she said.