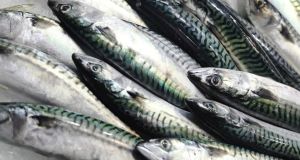 Handing back the share of fish caught by EU fleets in UK waters proposed by Brussels in Brexit trade talks would be an “unmitigated disaster” for Irish fishing, an industry group said.

Sean O’Donoghue, chief executive of the Killybegs Fishermen’s Organisation, said “a 15 to 18 per cent hit” on mackerel - a catch the Irish fleet relies heavily on in British waters - would be damaging for Irish fishing but said that the “devil will really be in the detail” of any deal based on species breakdown.

He said the Irish industry would examine the detail on the value on particular stocks of white fish such as cod and haddock and pelagic such as mackerel in any trade agreement brokered.

“I would caution very strongly about making any predictions on making that figure until we see how it is actually being worked out,” Mr O’Donoghue told The Irish Times.

The final breakdown of concessions from the EU to the UK could have “very little or minimal effect” on the Irish fishing industry if full access to British waters is retained.

“If, for example, we have the status quo and no access to British waters, that is dreadful,” he said.

The EU’s Brexit negotiator Michel Barnier said last week the EU had offered to hand back between 15 and 18 per cent of the value of fish caught by EU fleets in British waters to the UK.

Brussels estimates that the EU fleet’s catch in UK waters is worth about €650 million a year, making the offer to the British the equivalent of up to 18 per cent, or €120 million, of that revenue.

The two sides are far apart on fishing, however: London wants European access to UK waters to be reduced by 80 per cent.

“If we were to lose, which I know isn’t the case, 15 to 18 per cent of our quotas across the board, it would be an unmitigated disaster for us,” said Mr O’Donoghue.

More than 60 per cent of mackerel caught by Irish boats is in British waters, as the quality of the fish is best in the winter months when the fish are migrating through UK-controlled seas north and west of Scotland and north of Northern Ireland.

Fishing remains a key sticking point in the ongoing trade negotiations between the EU and the UK as the clock ticks down to the December 31st deadline when Brexit comes into effect.

British Foreign Secretary Dominic Raab said on Sunday that there was a “point of principle” on fishing and that the UK as a “coastal state” wanted “to be able to control our waters.”

Minister for Foreign Affairs Simon Coveney said the UK was trying to link fishing to “a political narrative around sovereignty”, and that Britain could not claim ownership of “shared stocks” such as mackerel spawned and grown in Irish waters and caught in British waters.

“These are shared stocks and what the UK is trying to do is create this perception that they own all fish that are caught in their waters as opposed to it being a shared stock in many cases,” Mr Coveney told RTÉ ’s Morning Ireland radio programme.

The Minister recognised that fishing was a “highly political and emotive issue for both sides”, but said the UK was looking for access to many other EU markets beyond fishing in a deal.

Mr O’Donoghue, the chief of the one of the country’s most influential fishing groups, refused to concede that it was inevitable Irish fleets would have to give any access to UK waters.

“We see that access to UK waters has to be considered in the same light as the UK seeking access to EU markets in other areas,” he said.

“This is where the linkage is critical and the EU has been steadfast on this and reiterated by both Barnier and eight member state fisheries ministers on Friday and by the Minister for Foreign Affairs this morning.”