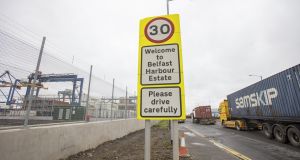 Newry wine merchant Anjo Wines has been supplying hotels, bars and restaurants in Northern Ireland since 1985. It is run by brothers Kevin and Garrett O’Reilly and the business has managed to survive the pandemic, largely thanks to its network of off-licences.

“We’re lucky to have our own shops, otherwise we’d be shutting the doors,” says Kevin O’Reilly.

But with the United Kingdom’s transition period before leaving the European Union ending on January 1st, he sees bigger problems ahead.

His wine providers in England say a shipment that takes four days could take four weeks next year due to new checks and regulations. “It’s a mess,” he says. “Come the new year, with the pandemic and Brexit, it’s going to be a double kick up the backside.”

He is also concerned about increasing prices for customers. “Prices are going up and incomes are coming down. Our issue is explaining that to the guy who comes in for his French or Spanish or Italian wines.”

Anjo Wines is not alone in its concerns.

With less than six weeks until Brexit, many businesses in Northern Ireland remain underprepared for change or uncertain on what that change will mean for them.

The Northern Ireland protocol, which will require some checks on goods coming from Great Britain into Northern Ireland, will come into effect on January 1st regardless of whether the UK reaches a trade deal with the EU or not.

But Northern Irish firms do not know how these checks will work, business leaders told Westminster MPs last week. “We have a transition period, but we do not know what we are transitioning to with six weeks to go,” Ulster Farmers’ Union president Victor Chestnutt told a committee meeting at House of Commons.

A survey by the Northern Ireland Chamber of Commerce last month found that just 39 per cent of members are preparing for Brexit, compared to 60 per cent in the first quarter of the year.

The Covid-19 pandemic has also made businesses more vulnerable than they were at the start of the year.

Stephen Kelly, director of lobby group Manufacturing NI, said a third of the manufacturing workforce has either been made redundant, is at risk of being made redundant or is on furlough, making preparations difficult. “This time last year, you had people stockpiling to minimise disruption,” he said. “Now, we are horribly exposed.”

As a result, many businesses, particularly in the agrifood industry, are scaling back. One Fermanagh food producer, for example, said it will focus on its Northern Irish business instead of expanding further in the UK and Republic of Ireland until it sees “what way things are going”.

Its supply routes are particularly vulnerable. About half of Northern Irish food exports are shipped through Dublin to the UK, says Mr Kelly. “If you have a food producer in Newry, for example, up to 90 per cent of their produce is going through Dublin.”

Due to potential disruption, businesses are looking at other routes. Mr Bell says “previously unpreferred options” – such as shipping to Scotland via Belfast – are being evaluated. “Any alternative is inevitably going to be more expensive for customers,” he adds.

Mr Bell and Mr Kelly have welcomed some of the measures introduced by the UK government to prepare Northern Irish businesses. Boris Johnson’s government is funding the expansion of Northern Irish ports to process British goods travelling into the country after Brexit, at a cost of £40 million (€44.5 million).

“There are competitive advantages from the Northern Ireland protocol that my competitors elsewhere in the UK would break their arms to have.”

A £200 million trader support service launched in September will also support businesses trading under the Northern Ireland protocol. However, only 2,000 of the estimated 10,000 eligible businesses have signed up, treasury minister Lord Agnew told a treasury committee last month.

Business leaders were unimpressed when treasury minister Theodore Agnew also said they have their “head stuck in the sand” about Brexit readiness, coronavirus and an economic recession.

“Our reaction is that Lord Agnew seems to have his head stuck somewhere else,” says Mr Kelly.

Talks with the EU continue, but Kevin O’Reilly is unconvinced that Boris Johnson’s government will protect Northern Ireland’s interests. “We know there’s bad times ahead,” he says. “With our politicians, we’re well used to being an afterthought.”