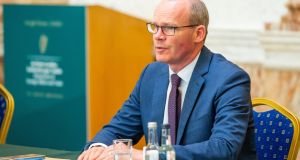 No agreement on a future relationship with the UK will be ratified as long as Britain’s threat to break international law remains, Minister for Foreign Affairs Simon Coveney has said.

Mr Coveney told the Dáil that “trust and relationships like everything in politics are what matter here”.

He asked “why would the EU ratify a new agreement with a country that is threatening to break an agreement that’s not even 12 months old?”.

Mr Coveney was speaking as he opened a Dáil debate to outline the current state of the negotiations.

Mr Coveney also warned that firms doing business with or through the UK when the transition period ended needed to be “ready for the range of new procedures and paperwork that simply do not apply today to such trade”.

Britain’s Internal Market Bill continues its progress through Westminster, which it says breaks international law in a “limited” way.

Labour TD Brendan Howlin said he was “deeply concerned” about Ireland’s ability to export to and import from continental Europe immediately after January 1st next year.

Leaders of northern parties opposed to Brexit met Mr Coveney at Iveagh House earlier on Thursday where they said they were looking to the Government and the EU to protect the gains of the peace process and the Belfast Agreement.

The Sinn Féin deputy leader and Deputy First Minister Michelle O’Neill said that the people of the North were being “used as pawns in a political game between the British government and the EU”.

Meanwhile, at Stormont, a senior civil servant warned that new facilities required to check goods arriving at Northern Ireland’s ports from Great Britain would not be ready in time for the end of the Brexit transition period.

The permanent secretary at the North’s Department of Agriculture, Denis McMahon, told the Stormont scrutiny committee on Thursday that “despite monumental efforts by the team, not everything will be in place by January 1st, 2021”.

The short time-frame, he said, made the deadline “almost impossible”, given negotiations on a potential trade deal were still ongoing.

Separately on Thursday, the North’s chief constable, Simon Byrne, warned that £4.5 million was needed by the Police Service of Northern Ireland (PSNI) to “balance the books for the commitment to fund officers to police the Brexit challenge”.

Giving evidence to the Stormont Justice Committee regarding Brexit preparedness, Mr Byrne said: “Criminals will exploit any gaps, in the opportunity to raise money – differences in tariffs, differences in the Common Travel Area – we are alert to them. They could be exploited.”