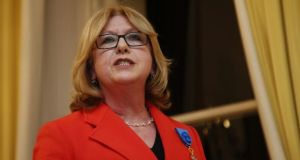 Former president Mary McAleese: Belfast Agreement has not been “road-tested” against Brexit or a referendum on partition. Photograph: Nick Bradshaw

Former president Mary McAleese has warned of possible implications of Brexit and a referendum on Irish unity for the 1998 Belfast Agreement.

“The vast majority of people signed up to the idea of that referendum but there are people who didn’t. There are small constituencies which didn’t, and would still have a grá for the old violence possibly.

Mrs McAleese was speaking in an interview with broadcaster Mary Kennedy to be released on the Senior Times podcast on Tuesday.

In the wide-ranging interview Mrs McAleese also speaks of her happiness at her son Justin’s same-sex marriage, her own upbringing in Belfast, the achievements of her two-term presidency, including the 2011 visit of Queen Elizabeth to Ireland, and her current work as a canon lawyer to secure reform in the Catholic Church.

Mrs McAleese’s recently published memoir Here’s the Story remains in Ireland’s bestseller list and was nominated last week for a Book of the Year Award in the non-fiction category.

Her interview with Kennedy is the third of eight to be released by Senior Times featuring Ireland’s leading women writers. The series continues with new podcasts every Tuesday until December 1st and is available at seniortimes.ie as well as on all major podcast platforms.