‘We have worked too hard to get Ireland worked out,’ US president-elect says

When questioned by RTÉ reporter Brian O'Donovan US president-elect Joe Biden said he did not want a guarded Border between Ireland and the UK, adding that he had discussed the matter with Boris Johnson and other EU leaders. Video: Reuters 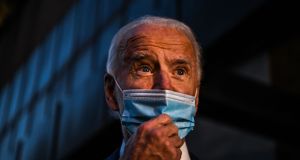 US President-elect Joe Biden talks to the media after neeting with members of his cabinet at the Queen in Wilmington, Delaware. Photograph: CHANDAN KHANNA/AFP via Getty Images

US president-elect Joe Biden said on Tuesday night that he does not want to see a guarded border between the Republic of Ireland and Northern Ireland after Brexit.

Mr Biden, in his first comments on Brexit since winning the US presidential election, said he had discussed the issue with Taoiseach Micheal Martin, British prime minister Boris Johnson and French leader Emmanuel Macron.

“We do not want a guarded border. We want to make sure. We have worked too hard to get Ireland worked out,” he told reporters in Wilmington, Delaware.

“The idea of having the Border North and South once again being closed – it’s just not right. We have got to keep the Border open.”

Mr Biden waded into the Brexit debate as a candidate in September when he warned that a breach of the 1998 Belfast Agreement, which underpins the Northern Ireland peace process, would threaten the prospect of a future US-UK trade deal.

He made his comments after introducing his picks for senior roles in his national security and foreign policy team at an event in his hometown in Delaware.

“America is back, ready to lead the world, not retreat from it,” Mr Biden said at the event.

Mr Biden has tapped former senior diplomat Antony Blinken to be secretary of state in his new administration, while Jake Sullivan, an Irish-American who advised Mr Biden when he was vice-president and worked with former secretary of state Hillary Clinton, is to be his national security adviser.

The appointments signal a move away from the “America First” nationalism and unilateralist policies of President Donald Trump, who is a fan of Brexit and has been close to its main champion, Mr Johnson.

Mr Biden said that after his inauguration in January the US would “once again sit at the head of the table, ready to confront our adversaries and not reject our allies”.