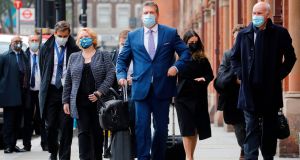 The European Union has agreed to intensify talks on a post-Brexit free trade agreement on the basis of legal texts, a stated British condition for formal negotiations to resume. But Downing Street said there was no basis to return to the talks until the EU agreed to a “fundamental change of approach”.

EU chief negotiator Michel Barnier made the offer during a call with his British counterpart David Frost on Monday after Britain rejected his offer of in-person talks in London.

“As stated by \ [Euroepan Commission president] Ursula von der Leyen on Friday, I confirmed that the EU remains available to intensify talks in London this week, on all subjects, and based on legal texts,” he said.

When Downing Street said last week that the trade talks were over, it called for the EU to start negotiating on the basis of legal texts. But Downing Street said that although Lord Frost’s conversation with Mr Barnier was constructive, it was not enough to restart formal talks.

“The UK continues to believe there is no basis to resume talks unless there is a fundamental change of approach from the EU. This means an EU approach consistent with trying to find an agreement between sovereign equals and with acceptance that movement needs to come from the EU side as well as the UK,” a spokesman said.

Mr Barnier will this week make a fresh compromise offer on state aid, one of the two biggest remaining stumbling blocks in the negotiations. The EU concession is expected to represent a move towards satisfying Britain’s concerns about the impact of any agreement on subsidies for businesses on its national sovereignty.

Last week, French president Emmanuel Macron signalled an important EU concession in the other problem issue of fisheries, acknowledging that European fishermen will not enjoy the same access to British waters in future.

The latest moves in the trade talks came as cabinet office minister Michael Gove and European Commission vice-president Maros Sevcovic reported progress in talks on how to implement the Northern Ireland protocol.

Mr Sevcovic said after a meeting in London of the joint committee charged with implementing the agreement that Mr Gove had shown a clear commitment to finding mutually agreed solutions to all outstanding issues.

The EU agreed to give Britain access to the necessary IT systems, databases and networks needed to fulfil its obligations under the protocol.

“The EU side also strongly reiterated the need for the UK to substantially accelerate work on all necessary measures ensuring full practical implementation, in particular with regard to border control posts, Value Added Tax and the registration of Northern Irish traders for VAT purposes,” the European Commission said in a statement.

Mr Gove echoed the EU’s positive tone, telling the House of Commons that Brussels was taking a “very constructive” approach to the work of the joint committee. Amid reports that the EU has dropped its demand for an office in Belfast in favour of a small number of officials at Northern Ireland ports, Mr Gove signalled that agreement on that issue was within reach.

“We also acknowledge the EU’s concerns about appropriate monitoring of implementation. We now have a better understanding of its requests and the reasoning behind them,” he said.

Mr Gove was speaking as the House of Lords began debating the Internal Market Bill which would break international law by giving British ministers the power to override the Northern Ireland protocol.