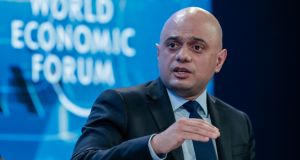 UK chancellor Sajid Javid. “His message to UK business was clear – the UK was getting ready to diverge from EU rules.” Photograph: Jason Alden/Bloomberg

This time next week the UK will have left the European Union. You will hardly notice, bar reports of whatever show Nigel Farage and his pals put on in London. Nothing practical will change at 11pm on Friday evening. There will be much talk of how the real work – negotiating a new relationship between the EU and UK remains to be done – and how Boris Johnson’s claim of “getting Brexit done” ignored all this. The UK will enter the transition period, when existing arrangements will continue to apply to allow time to negotiate the future.

Yet something really significant will have happened. The UK will have left. In that sense, Brexit will be done. And, to borrow the phrase from the radio ad, “once they’re gone, they’re gone”. The vital legal ties will be broken and the game will be over.

The calculus for Ireland is clear – the harder the Brexit, the worse the hit

Brexit did, after all, mean Brexit. And just as this was the issue that took up so much time and energy for the outgoing government, the consequences will be central to whoever takes up the reins next. And the indications from London – particularly its determination to diverge from EU rules – make this potentially both complicated and dangerous. And will make the job of making the new trade arrangements for Northern Ireland work all the more tricky.

The talks have still to start in earnest – though Johnson is insistent he will not seek to extend them and that December is the deadline. Either a basic EU-UK trade deal, probably just covering goods will be done by then or it won’t and the UK will crash out of the transition period and trade on World Trade Organisation terms with the EU.

This would have a similar impact on trade between Ireland and Britain as the crash-out Brexit we feared might happen at the end of this month. Not good, in other words and probably enough to knock most of the expected growth out of the economy next year,along with the anticipated rise in tax revenues underlying the plans being outlined by the various parties in the election campaign.

Arguably the most important event of the Irish general election campaign was not the moment on the Virgin TV debate where the Taoiseach was asked about taking drugs, but rather an interview given by UK chancellor Sajid Javid to the Financial Times last Saturday. His message to UK business was clear – the UK was getting ready to diverge from EU rules. Since then the UK government has ducked and dived in the face of business warnings, with Javid saying at Davos that the UK would not diverge “for the sake of it”, but would not accept rules set in Brussels.

We will just have to see where reality meets rhetoric when the talks get under way in earnest. But the EU has been clear. The more the UK diverges from EU rules and regulations in key areas, the more it will face barriers entering EU markets in future. The EU is concerned that the UK will seek to undercut it in areas such as environmental regulations and employee rights – giving its businesses a competitive advantage.

You can argue about just what model may emerge at the end of this. But the calculus for Ireland is clear – the harder the Brexit, the worse the hit. Calculations by consultancy firm Copenhagen Economics in an updated report published recently are that, if a trade deal were done – as both sides say they want to do – the long-term damage to Ireland, while significant, would be manageable. But a crash out and a move to trading on WTO terms would be much more damaging, particularly for agriculture and rural Ireland – but also for the wider economy.

Current Department of Finance estimates for the public finances are based on a negotiated EU-UK deal, or an extension of the transition period. The risk of the harder Brexit scenario should be featuring more in the election debate. Whoever is in power will have a limited ability to affect this outcome – less than in the first phase when the Irish Border was the central issue. But the outcome will be central to their plans. What would you do if Brexit goes wrong is an uncomfortable question for the parties as they roll out the election promises, but an important one – not least because the choices and trade-offs would then become much starker.

There is another challenge too, which next the government will have to face. The deal agreed between Leo Varadkar and Boris Johnson, which formed the basis of the UK’s exit, involves new trading rules for Northern Ireland. How these will work – indeed whether they will work – is now a big issue not only for unionists but for businesses across the North.

As ever Johnson is trying to play both sides. He is assuring businesses in Northern Ireland of “unfettered access” to the UK market, while having already signed up to a deal which will involve new checks and procedures on goods coming from Britain into Northern Ireland – and at least some new bureaucracy on goods moving the other way. This will be making the EU side very uncomfortable, as checks on goods coming into Northern Ireland will be a vital protection for the single market, given that these goods can then go on to the Republic without further checks.

The risk is of the view taking hold in the North that the price of avoiding an Irish Border is an arrangement which brings new problems and costs in dealing with their biggest market – the rest of the UK. This goes beyond economics and will become a major political issue. Brexit may be about to be done – but working out the consequences is going to consume the next government, just as it did the outgoing one.