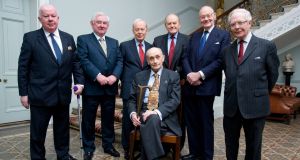 Speaking in Brussels on Monday, the UK’s chief Brexit negotiator David Frost laid down demanding red lines for the UK’s future relationship with the European Union. The negotiations that are about to begin are of crucial importance for the island of Ireland, but find the Republic in political stalemate.

In these circumstances, the country will rely on the services of a talented and experienced body of civil servants, whose political and diplomatic skills were seen at their finest in the negotiation of the Belfast Agreement of 1998, and in the difficult implementation process that followed.

One of the most important but least visible features of these achievements was the role played by a quiet but effective Merrion Street-Whitehall relationship that saw remarkable problem-solving initiatives agreed by Irish and British civil servants, even while their political masters were responding to quite different and sometimes divisive dynamics. But might this arrangement be yet another unintended casualty of Brexit?

The Irish and British national archives, and the oral testimony we have collected ourselves, offer abundant evidence of the impact of visionary officials such as Robert Armstrong and Robin Butler on the British side, and the late Dermot Nally and his colleagues in the Department of the Taoiseach. Far-seeing diplomats in the Department of Foreign Affairs and their UK counterparts also formed part of a remarkable group who reshaped the British-Irish relationship. Discussions between them proceeded through a range of formal and informal contexts, from tightly structured meetings to more fluid social occasions.

As trusted advisers they were able to offer political leaders counsel on political options and persuasive guidance in selecting between them. Such was the level of mutual trust at the most senior civil service level that there were times when negotiations between British and Irish civil servants were considerably less fraught than the process of ‘selling’ draft agreements to prime ministers.

Thus, just before the Sunningdale Agreement of 1973 British officials were able, following preliminary contacts with their Irish counterparts, to produce a draft of the communique that was ultimately to be transformed into the final agreement.

On March 1st, 1984, Robert Armstrong and a colleague came to Dublin to present their startled Irish counterparts with a radical offer of security co-operation that would transform the significance of the Border. The counterproposals put forward more than two months later by Dermot Nally and his colleagues articulated a strong Irish position and formed an early stage in drafting the Anglo-Irish Agreement of 1985.

In 1991-1993 a particularly close working relationship between British and Irish civil servants facilitated agreement on the Major-Reynolds Downing Street declaration of 1993, creating a balanced set of principles that incorporated elements of both republican and loyalist thinking.

In April 1998, the so-called Mitchell draft of what would become the Belfast Agreement was put together by British and Irish civil servants, under the direction of prime ministers Tony Blair and Bertie Ahern.

This winning formula – the capacity of compromise at civil service level to mitigate the sometimes profound divisions that marked the British-Irish relationship at political level – proved vulnerable to shifting patterns of interstate politics after Brexit came centre stage in 2016.

The new phase in British-Irish relations differs from the earlier one in three important respects.

First, new, deep-rooted divisions reflecting conflicting political priorities have crystallised. These tensions may well have lain dormant for several decades, as British and Irish elites – and especially the latter – worked pragmatically within the EU to advance national economic and other interests. But there was never consensus on Europe within the British elite: the ‘Brexit war’ since 2016 has been a story of the emerging political ascendancy of sceptics and sovereigntists within the Conservative party. Tensions between British and Irish political leaders and officials on policy paradigms and political values now seem inescapable.

The second change has been the disappearance of the EU as a framework for dispute resolution between two neighbouring member states. Joint British-Irish membership of the EU saw the near-disappearance of the Border, boosted economic development, further facilitated freedom of movement and helped to resolve such long-running bones of contention as cross-jurisdictional extradition. Brexit once again threatens these important gains, notwithstanding the ‘Ireland-Northern Ireland’ protocol, the full implications of which are as yet unclear.

The third consequence of Brexit is indirect. The EU offered a forum within which British and Irish civil servants met regularly, while politicians interacted in the European Parliament and ‘on the margins’ of European Council summits. The sudden removal of a myriad of opportunities for professional and social contact between civil servants and politicians will do little to facilitate mutual understanding between the British and Irish sides at a critical time, raising the risk of the return of separate bureaucratic silos in the two jurisdictions.

With diverging geopolitical perspectives, few shared institutions and limited contact between civil servants, an important British-Irish safety net – potentially invaluable if a British-Irish cold war returns – has now been dismantled. Its reconstruction will be a difficult task.