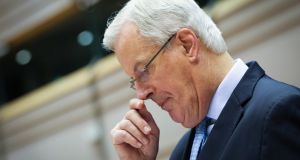 Michel Barnier referred to British “sovereignty” several times and called it “a legitimate concern of the government of Boris Johnson”. Photograph: EPA

Intensified negotiations between the European Union and Britain will begin on Thursday and “take place daily including weekends” in a race to reach a deal in time for the end of the year, the two sides have announced.

The shift comes after London called off planned talks earlier this week and said negotiations were pointless without a change in approach from Brussels, after months in which the two sides have struggle to break a deadlock with hundreds of billions of euros of annual trade at stake.

But the British side said it had taken heart from a speech by chief EU negotiator Michel Barnier in the European Parliament on Wednesday, in which the Frenchman said that compromises were necessary on both sides.

Mr Barnier also referred to British “sovereignty” several times and called it “a legitimate concern of the government of Boris Johnson”, adopting language that is often used by London to object to EU proposals.

A Downing Street spokesman said the British government had “studied carefully” Mr Barnier’s statement that he had acknowledged that the EU “was dealing with an independent and sovereign country”.

“It is clear that significant gaps remain between our positions in the most difficult areas, but we are ready, with the EU, to see if it is possible to bridge them in intensive talks,” the spokesman said.

The Minister for Foreign Affairs Simon Coveney said the resumption of talks was “very welcome”.

“The stakes are high and nothing is guaranteed but a trade deal to minimise the damage of Brexit is possible,” he wrote.

Mr Barnier told the European Parliament that the “outline of an accord” was visible on police and judicial cooperation and that “prospects for solutions” were starting to emerge on trade in goods, services, energy or the coordination of social security.

Progress still needed to be made on fair competition guarantees and mechanisms for resolving future disputes, while access to fishing waters was “last major sticking point”, Mr Barnier said.

“I would like to remind you that the European Union’s attitude in these negotiations has not changed, and will not change until the last day,” Mr Barnier added.

“We will remain calm, constructive, respectful, but also firm and determined in the defence of our principles and interests. We will seek the necessary compromises, on each side, to have an agreement until the last useful day. Our door will always remain open.”

Both sides have warned that time is short, and have urged businesses to prepare for disruption on December 31st when the terms of Britain’s trading relationship with the bloc will change abruptly.

If the two sides reach a deal it will avoid tariffs coming into place on trade between Britain and the EU and would lessen overnight disruption in many areas, while keeping the relationship between the two sides on a steadier footing than the rancourous fallout that a failure to reach a deal would represent.

But the European Commission and the Irish Government have stressed that even if a deal is reached changes will come into force on January 1st that businesses need to prepare for and that will affect consumers, such as the need to file customs declarations.

Under the terms of Britain’s exit from the EU earlier this year, special arrangements for the North were agreed in order to avoid a hard Border forming across Ireland.

Officials met earlier this week to discuss how to implement these in a meeting both sides described as “constructive”. However, the EU has called on the British government to retract aspects of a new Bill introduced into parliament that would override parts of last year’s deal related to checks between Britain and Northern Ireland.

Any deal must be ratified by the European Parliament, and the EU side believes that early November is the latest time by which an agreement can be reached.