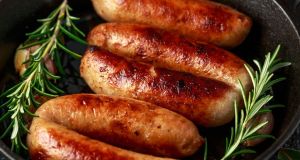 Under EU rules there are restrictions on certain meat products, such as sausages, from outside the European Union.

European Union and UK negotiators are locked in tense negotiations to seek agreement to prevent certain meat products such as unfrozen mince and sausages being blocked for export from Britain into Northern Ireland.

Certain kinds of foods such as unfrozen mince from outside the EU are considered so high risk that there is a defacto ban on importing them - a rule that will apply to Britain from January 1st.

The EU currently has no provision such as export health certificates to allow for the import of such produce from outside the bloc.

As Northern Ireland is staying in line with the EU’s Single Market and applying its customs rules while Britain diverges, this poses serious problems for supermarkets in the North that fill their shelves with produce such as unfrozen sausages and mince from England.

“The problem is that there is no export health certificate in existence to do these things,” said Nick Allen of the British Meat Processors Association, adding that the industry was “lobbying hard” for one to be created.

There is speculation that the British government could threaten to retaliate if the EU does not create an export health certificate for unfrozen produce by also blocking such imports from the EU, including Ireland, which would cut off a major market.

However, such a move would create a shortfall in Britain as it is a significant net importer of meat, and the idea was played down by sources close to the talks.

“People could argue if you’re not going to let us have one, we’re not going to let you have one,” said Mr Allen. “There’s a lot of work going on to try to resolve these things, and you just have to hope that the politicians will come up with some kind of a grace period to sort this out because we’re running out of time.”

In a statement, Meat Industry Ireland, who represent Irish meat plants, said food producers were eager to get clarity on the export issue “without any further delay”.

The group said there were “significant concerns that, even at this late stage, there are a wide range of certification issues that need to be resolved to ensure orderly trade post Brexit. ”

“The certification of chilled meat preparations is a particular issue that has arisen that could be disruptive to trade if not addressed. It is an issue which we believe can be resolved in the overall conclusion of export certification requirements between both sides,” the group said.

Minister for Agriculture, Charlie McConalogue has said negotiators will work hard to ensure there is no ban on a wide range of foods moving between the UK and Ireland.

Speaking on RTÉ radio’s Morning Ireland, Mr McConalogue said the necessity for such talks was a reflection of the challenges that Brexit presented, and highlighted how complicated the whole issue was.

Mr McConalogue said it was important that there be strong engagement to see how the issue can be resolved. He denied that this was an example of “brinksmanship”.

There was no doubt that the Northern Ireland protocol was the best possible outcome, but it did not resolve all the issues, he said. “Across the board from January 1st there are going to be significant changes.”

Director Northern Ireland Retail Consortium Aodhán Connolly said the issue was one of many unsolved questions in the implementation of the Northern Ireland protocol that he had long raised concerns about for its implications for imports into the North.

“We have brought this up with the UK government and the EU from the start of the year. It’s one of many things that there still needs to be clarity on,” Mr Connolly said.

“Consumers in Northern Ireland will be adversely affected because this will reduce the choice on the shelves.”

Earlier this month the Democratic Unionist Party first minister Arlene Foster and Sinn Féin deputy first minister Michelle O’Neill wrote a rare joint appeal to the European Commission to ask for a solution to avoid the risk of a threat to food supplies.

Discussions are ongoing on how to resolve the issue, with industry figures calling for a grace period in which the implementation of rules would be phased in, something the EU side is thought to be considering.

Long term however, it may be unlikely that the EU will change its rules to cater for Britain, meaning that retailers in Northern Ireland may have to find alternative supply routes.

For less high-risk meats such as frozen produce, the non-EU country of origin must be authorised for imports into the EU, and establishments that produce the meat must also be approved to follow EU standards.

The UK has yet to be listed as such a country, which is also a cause of concern to British meat producers, some of which are heavily reliant on exports to the EU.