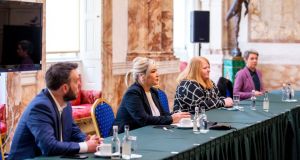 Northern parties opposed to Brexit are looking to the Irish government and the EU to protect the gains of the peace process and the Belfast Agreement, their leaders said on Thursday after meeting the Minister for Foreign Affairs Simon Coveney at Iveagh House.

The Sinn Féin deputy leader and deputy First Minister Michelle O’Neill said that the people of the North were being “used as pawns in a political game between the British Government and the EU”.

Mr Coveney offered the leaders assurances that the Irish Government would seek to defend the interests of the people of Northern Ireland and peace agreements, the leaders said.

“The threat of no-deal should be taken off the table,” he said.

Alliance leader Naomi Long said that a no-deal scenario would threaten security co-operation between the North and Dublin. She said that the British government was “trashing its reputation” throughout the world.

Green leader Claire Bailey said that Mr Coveney had given them assurances that the Withdrawal Agreement would be upheld, though the leader were fiercely critical of the British Government’s apparent willingness to break the agreement.

Ms O’Neill said it was “less than 100 days before the end of the transition period and everything is still up in the air”.

She said a no-deal was “a very real possibility at this stage”.

“What is the British government strategy in all of this? Are we just being used as pawns in the middle of their negotiations strategy? Either way, this is catastrophic for our economy.”

Mr Eastwood called on the British government to withdraw the Internal Market Bill, which threatens to set aside parts of the withdrawal agreement.