European Commission President Ursula von der Leyen has said that the next few days would be "decisive" as the 27-member bloc seeks to clinch a trade deal with Britain after its departure from the European Union. Video: Reuters 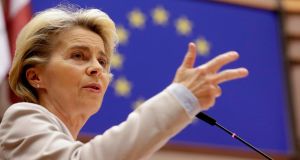 It is not yet possible to say whether there will be a deal with the United Kingdom to avoid a damaging lurch into widespread disruption and tariffs on trade on January 1st, European Commission president Ursula von der Leyen has said.

Either way, the coming days will be decisive and the European Union is prepared to negotiate hard to ensure there are guarantees locking in adherence to whatever “creative” compromise may emerge, she told the European Parliament.

“These are decisive days for negotiations with the UK. But frankly, I cannot tell you today if in the end there will be a deal,” she told MEPs.

Separately, Taoiseach Micheál Martin said there was still time for a “good result” in the trade talks and that he saw a landing zone for agreement on so-called level playing-field trade rules. “Sometimes you can get a good result in extra time,” Mr Martin told euronews television in an interview.

“I do believe there is a landing zone on the level playing-field, that then leads into a dispute resolution mechanism that would enable both sides to react if one was undermining the agreement and in breach of the agreement,” the Taoiseach added.

Ms Von der Leyen said the EU was ready to find a “creative” solution to the outstanding issues. “We will do all in our power to reach an agreement, we’re ready to be creative. But we are not ready to put into question the integrity of the single market,” she said.

“The next phase is going to be decisive. The European Union is well prepared for a no-deal scenario but of course we prefer to have an agreement.”

The commission president said there had been “genuine progress” on law enforcement and judicial co-operation, and on social security coordination, while on goods, services and transport there was “the outline of a possible final text”.

“In these areas there are still some important issues to agree, but they should be manageable,” Ms Von der Leyen said.

However, the old stumbling blocks of fisheries, the level playing field, and governance still could “make the difference between a deal and no deal”.

“With very little time ahead of us, we will do all in our power to reach an agreement. We are ready to be creative,” Ms Von der Leyen said.

On fisheries, where it is widely expected that the EU will have to cede some ground, Ms Von der Leyen said the bloc was seeking “predictability and guarantees” for those who have fished in waters that now fall under Britain’s economic zone “for decades, if not centuries”.

She acknowledged that Britain’s recent bid to unpick elements of the previous withdrawal agreement with its Internal Market Bill had undermined trust.

“Trust is good, but law is better. And crucially, in light of recent experience: a strong governance system is essential to ensure that what has been agreed is actually done,” Ms Von der Leyen said.

To this end, the EU is seeking a strong enforcement mechanism to ensure the UK sticks to common standards on state aid, labour rights, environmental standards, and tax transparency, to ensure fair competition between companies.

Any deal must be ratified by the European Parliament as well as Westminster, and with time running out to translate and scrutinise the text talk has turned among MEPs to whether parts of the ratification process could somehow be moved to January, potentially with the deal being provisionally applied.

With patience running out, chief EU negotiator Michel Barnier has warned his British counterpart David Frost that unless there is the prospect of movement on the biggest sticking points, negotiators have little reason to travel to London to resume in-person negotiations this weekend.

Members of the negotiating team including Mr Barnier himself are in quarantine until at least Thursday under Belgian Covid-19 rules, after a senior EU negotiator tested positive for the virus, disrupting the timetable for the talks. – Additional reporting Reuters