Brexit could undermine how Northern Ireland firms do business in Britain, officials warn 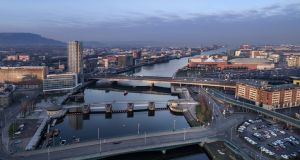 Senior Stormont officials have raised concerns over whether in the aftermath of Brexit, British legislation could affect how Northern Ireland firms do business in Britain.

The officials from the Department of the Economy told Northern Assembly members on Wednesday of the possibility that British businesses could have an advantage over their counterparts in the North.

This was because goods produced in the North would have to align to European Union standards under the terms of the Northern Ireland protocol while British goods could be produced to lower non-EU standards.

The officials were briefing members of the Northern Assembly economy justice committee on the Internal Market Bill, which sets the terms for trade with the UK after the end of the transition period at the end of the year, and the Trade Bill, which will create a structure for the UK’s international trade policy.

Economy department official Stephen Kelly said Stormont was “keenly interested” in trying to establish how competitive Northern Ireland goods would be in Britain.

“Under the terms of the protocol any Northern Ireland goods will have to be produced to EU standards whereas…other parts of the UK might have the freedom to reduce those standards, so we want to assess where that leaves our goods in terms of competitiveness,” he said.

His colleague Victor Dukelow, making the same point, said the new regulations could be used to “create points of difference” between Britain and Northern Ireland.

“The concern is that those points of difference could create competitive issues for Northern Ireland companies as they compete in the GB market place,” he said.

Mr Dukelow also expressed concern that under the regulations Northern Ireland could be limited in having access to free trade agreements that the British government might strike with countries outside the EU.

Referring to the recent trade deal agreed between the British government and Japan he suggested that certain Japanese goods that would be sold in Britain might not be available in Northern Ireland.

“The sort of outworking of all of this may mean that there are products from Japan that previously would not have gained access to the EU market that would now be able to gain access to the GB marketplace,” he explained.

“So our position under the protocol, were that to be the case, is we would be following EU rules and until the EU determines that those products are allowed into Northern Ireland, or into the EU, then there will be points of difference that emerge,” added Mr Dukelow.

The economy officials stressed while negotiations continued between the EU and the British government and in the absence of certainty over whether they would strike a deal it was difficult to be absolutely clear how the Brexit legislation would affect Northern Ireland.

Later on Wednesday afternoon senior Stormont official Andrew McCormick told the Assembly Executive committee that in terms of planning for the UK and EU failing to strike a trade deal that the Northern Executive was in regular contact with the Irish Government.

He said that one of the issues being addressed was how the British and Irish governments could try to resolve any problems in the event of no trade deal, and how this could be relevant to Northern Ireland. “There is a power there that could be invoked to settle something on a bilateral basis between Dublin and London which could be relative to what we need,” said Mr McCormick.