UK prime minister Borjs Johnson said if the UK doesn't get a Canada style trade deal then the deal "will have to be based on our existing withdrawal agreement with the EU”. 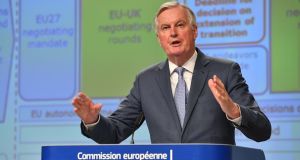 The EU made clear on Monday that Britain can not expect a zero-tariffs and zero-quotas deal trade with the bloc unless London agrees to terms that ensure there is fair competition with the European single market.

European Union Brexit chief negotiator Michel Barnier, laying out his mandate for negotiations with the UK following its exit from the EU last week, said there should be a level playing field over the long term on social, state aid and environmental standards.

He told a news briefing that all sides needed to prepare for the prospect of a “cliff edge” no deal at the end of the year.

Mr Barnier was speaking shortly before British prime minister Boris Johnson laid out his negotiating terms for talks with the EU.

Speaking in Greenwich, London, Mr Johnson said there was no need for a free trade agreement to involve Britain accepting EU rules on competition policy, subsidies, social protection, the environment or anything similar, “any more than the EU should be obliged to accept UK rules”.

“The UK will maintain the highest standards in these areas... without the compulsion of a treaty,” he said. “Here is the question: Are we going to insist that the EU does everything that we do as the price of free trade? Are we? Of course not.”

Mr Johnson said the UK wanted a comprehensive free trade agreement similar to the one Canada had with the EU, “but in the unlikely event that we do not succeed then our trade will have to be based on our existing withdrawal agreement with the EU”.

“Let’s be clear the choice is emphatically not deal or no deal, we have a deal.” The question is whether we agree a trading relationship with the EU comparable to Canada’s or more like Australia’s and I have no doubt that in either case the UK will prosper,” he said.

The EU and the UK have until the end of the year, when a transitional period expires, to try to secure a deal on trade and future relations – something London and Brussels both say they want to do, but on very different terms.

Mr Barnier, who said he had a “very direct and frank relationship” with Mr Johnson, suggested it would not be possible to complete the whole deal within 11 months.

“Irrespective of the result that we will arrive at at the end of the year – and in any subsequent negotiations, and I say that because to do everything we will need more than 11 months of time – it won’t be business as usual,” he said.

Trade talks will begin in March. After criticising his predecessor Theresa May’s approach in negotiating a divorce deal with the EU, Mr Johnson is striking a much tougher tone, saying Britain will not adhere to the bloc’s rules and regulations.

One British source who declined to be named has said UK negotiators are furious because they believe the EU, Britain’s biggest trading partner, is going back on the divorce deal by suggesting that London would have to adhere to the bloc’s rules to secure a free trade agreement. – Reuters/PA