Bad Brexit trade deal could be ‘devastating’ for North’s farms 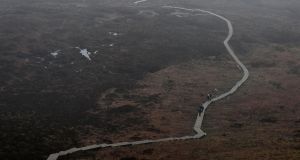 The Culicagh mountain boardwalk which threads along the border between Northern Ireland and the Republic of Ireland. Photograph: Charles McQuillan/Getty Images

Failure to strike a good post-Brexit trade deal could lead to the devastation of Northern Ireland’s farming industry, MLAs have been warned.

Farmers could quickly become uncompetitive if they are burdened by additional costs in a marketplace potentially flooded by cheaper imports from around the world, according to the chief executive of the Ulster Farmers’ Union.

Wesley Aston was among several agrifood representatives who painted a bleak picture of what the sector faces if effective post-Brexit trading arrangements are not agreed between the EU and UK before the end of the transition period in four months.

Members of the Northern Ireland Business Brexit Working Group were giving evidence to the Assembly’s agriculture committee, amid an impasse between the EU and UK on a trade deal.

“If we get the wrong sort of trade deal with the EU from a UK perspective, if the [Northern Ireland] protocol has to be implemented and then depending on how UK trade deals with third countries go, it could actually be devastating for us over here,” said Mr Aston. “Just in terms of additional costs and actually having much more competition in the market.

“The simple solution for us is that we want the UK to have as close a future trading arrangement with the EU as it has at present.”

Mr Aston said while the UK Government had committed to “unfettered access” for Northern Ireland traders to the British market, the commercial reality might make it unviable for farmers to sell into Britain.

“While, in theory, we will have unfettered legislative access, if there is additional hassle, additional costs, we will find ourselves at a disadvantage in comparison to our competitors.”

The protocol in the Withdrawal Treaty is the arrangement by which Northern Ireland continues to follow single market rules for goods and administers the EU’s customs code at its ports.

The UK government has acknowledged regulatory checks will be needed on some goods entering Northern Ireland from the rest of the UK, with the expansion of infrastructure to screen animals and food products.

But the government has insisted there will be no new physical customs infrastructure in Northern Ireland.

On Thursday, convenor of the working group Aodhán Connolly revealed it was still awaiting answers to 60 of the 67 questions.

“What we’ve asked from the Westminster government is for technical solutions and detail,” he said.

“Unless we get that then there are going to be . . . significant cost rises.

“Until we get that detail we don’t know whether that will mean that it’s prohibitive to either import or export to Northern Ireland.”

Mr Connolly, director of the Northern Ireland Retail Consortium, said products may disappear from the shelves as it could become unprofitable for some suppliers to operate in Northern Ireland.

“It is going to be those sort of things that already have a very low profit margin on them anyway,” he said.

“So not your luxury goods, but your staples, which will actually affect those people who are most economically vulnerable anyway, and that’s particularly concerning to me.”

The committee heard about concerns around the divergence of product standards and the resultant necessity for differing labelling systems.

Mr Aston said: “We have to align ourselves to EU rules, GB does not under the protocol and, while we start from the same place in a particular point in time, if that diverges, then we can find ourselves being uncompetitive fairly quickly and that’s a big concern.”

Michael Bell, from the Northern Ireland Food and Drink Association, said consumers could face higher prices and less choice if workable resolutions were not found.

“What is at risk is choice and value for consumers,” he told committee members.

“As to what products get affected by that, you could even see the scenario where a GB supplier of a product to Northern Ireland takes a view that the Northern Ireland market has become too expensive to service.” – PA