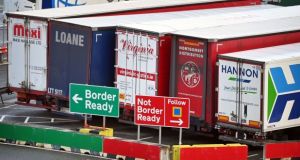 Signage at Holyhead port in North Wales indicates the direction vehicles should follow depending on the relevant paperwork for crossing to Ireland. Photograph: Paul Ellis/AFP via Getty Images

A lack of awareness among some Irish hauliers and logistics companies of new post-Brexit requirements for travel to the United Kingdom will be raised at Cabinet on Wednesday.

Minister for Foreign Affairs Simon Coveney will update his cabinet colleagues on developments since the start of new trading arrangements between the UK and the European Union came into force.

While there have been no significant delays emerging so far, the cabinet will be told that the major caveat on that is that trade volumes are exceptionally low at this time of year, which may be further compounded by stockpiling which took place in warehouses during negotiations to safeguard against the initial impact of a no-trade deal Brexit.

While the number of incidents of companies being unaware of the new rules has been low, they show the need for significant ongoing investment on haulier awareness campaigns, Mr Coveney will say. He will ask for the approval of wide-scale communications plans and direct outreach campaigns for those involved in the haulage business.

He will also update on how Covid and Brexit are interacting at ports of entry to the State, including contingency plans for staffing in the event of an outbreak of Covid or the diagnosis of key staff who cannot work from home with the disease.

On Tuesday, Revenue reminded hauliers of the new customs controls, highlighting a new email support service to deal with all pre-boarding notification (PBN) related queries. It said those responsible for transporting goods to or from Britain by ferry were required to create a PBN on the Customs RoRo Service before the goods start their journey, and in advance of vehicles moving to the departure port.

The cabinet will also be told about the impact of social distancing requirements on the post-Brexit trade inspection regime. The pandemic has made it difficult for officials from the Revenue commissioners and those inspecting other aspects of compliance with rules on trade, for example, to work simultaneously on the same load.

The Cabinet is also set to approve plans by Minister for Social Protection Heather Humphreys to maintain the Pandemic Unemployment Payment (PUP) at its current rates until March 31st. The payment will continue at four rates, linked to a person’s prior income.

The decision is being taken because the Government has put the State into Level 5, amid ongoing uncertainty in relation to the evolution of the virus.