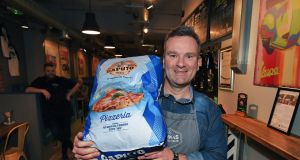 Darren Bradley, co-owner of Nonna’s Wood Fired Pizzas in Derry, holding one of the bags of flour from Naples used in the restaurant. Photograph: Trevor McBride

Two pizza-loving entrepreneurs, whose Derry business has just been named as the best takeaway in Northern Ireland, are worried that failure by the UK to secure a Brexit trade deal in talks that begin on Monday could undermine their business.

Brothers Darren and Ryan Bradley, who both have backgrounds in IT, established Nonna’s Wood Fired Pizzas in Derry in 2016 after years of making pilgrimages to small towns and villages throughout Italy to explore Italian cuisine and culture.

After many failed attempts to find authentic Italian pizzas back on home soil, they decided to build their own “back yard pizza oven” and taught themselves the “art of proper pizza making from scratch”. The brothers established their first restaurant in Spencer Road in Derry and then quickly followed it up with another on Shipquay Street.

They are now looking at the possibility of investing in pop-up restaurants in Belfast and at festivals and events throughout the island.

According to Darren their “passion” for discovering and sourcing the “best, fresh ingredients” is what sets them apart.

But the brothers import all their pizza flour from Naples, and their mozzarella from Toons Bridge Dairy in Macroom in west Cork and Cratloe Hills Sheep’s Cheese from Co Clare.

Their dedication to “fresh and locally sourced products” was just one of the reasons why the judging panel from this year’s Great British Takeaway Awards decided to choose Nonna’s as the only pizzeria winner out of competitors selected by public votes from 12 regions from across the UK.

Darren said both he and his brother Ryan are delighted to have won the award, but they are concerned about what Brexit could mean for a business that depends on a vital raw ingredient from Naples.

“We’ve lots of Italian connections and, like everyone else, we’re waiting to see what happens. Will there be new tariffs? Will there be new rules and regulations? Nobody knows at this time what it will mean for us,” Darren said.

Negotiations on the trade deal start on Monday. Discussions are scheduled to be intense, with 10 rounds of meetings between the EU and the UK scheduled every three weeks with a view to having a Brexit deal sealed by the middle of October.