Any attempt by UK to override withdrawal agreement ‘an act of bad faith,’ SF TD says 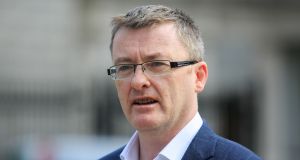 Sinn Féin TD David Cullinane said any move to disregard the withdrawal agreement ‘simply cannot be allowed’ as it would be in contravention of an international agreement, not just an agreement with Ireland and Europe. Photograph: Gareth Chaney/Collins.

Sinn Féin TD David Cullinane has said any UK attempt to override elements of the Northern Ireland Protocol through upcoming legislation would be “an act of bad faith.”

Mr Cullinane was responding to a Financial Times report that British legislation due on Wednesday will “eliminate the legal force of parts of the withdrawal agreement” in areas including state aid and the new customs arrangements for Northern Ireland.

Speaking on RTÉ radio’s Morning Ireland the Waterford TD said any such move “simply cannot be allowed” as it would be in contravention of an international agreement, not just an agreement with Ireland and Europe. The island of Ireland had to be treated as a single trade unit, he said.

A source told the Financial Times that the move involving sections of the internal market bill could “clearly and consciously” undermine the agreement on Northern Ireland which prime minister Boris Johnson signed in October to avoid a return to a hard border in the region.

It comes as EU and UK negotiators prepare to resume talks on a trade deal. Mr Johnson has ratcheted up tensions - on Monday he is due to say that if an agreement is not reached by October 15th, both sides should “accept that and move on”.

DUP MP Sammy Wilson said he would be very happy for the government to scrap the withdrawal agreement which, he said, threatens economic hardship for the region and to disrupt trade with Great Britain.

“If the government is [meaning] to tear it up I would encourage them to do so but I don’t know that that is the case and I haven’t seen the bill,” he said.

However, he agreed he was “fed up” with Mr Johnson’s vacillations on elements of Brexit planning.

“We need to have clarity on where we stand on these particular issues,” he told RTE’s Today with Claire Byrne programme.

Although the forthcoming legislation has been played down in some quarters, it has sparked concerns.

Speaking on BBC Radio, Fine Gael TD Neale Richmond who chaired the Seanad Brexit committee during the last government, said the creation of a hard border on the island would represent a “material threat to the Good Friday Agreement”.

“The withdrawal agreement; it was formulated in order to provide that guarantee for three key issues…the rights of citizens, the financial obligations of the UK, but crucially the Irish protocol element is there to make sure there is no return to a hard border on the island of Ireland,” he said.

In Northern Ireland, Naomi Long of the Alliance Party said there would be “catastrophic consequences” should Westminster override the withdrawal agreement.

“Let’s make it clear right now where we stand and the catastrophic consequences of such action now, while there is a chance of influencing how this unfolds,” she said on Twitter.

“At the very least, if they proceed, they can’t claim the damage it will bring in its wake was not anticipated.”

Ms Long had been responding to Steve Aiken, leader of the Ulster Unionist Party (UUP), who called on people to “await the actual proposed legislation” before making a judgment.