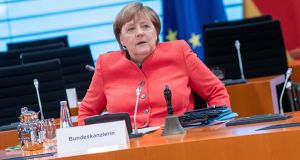 Angela Merkel has warned Britons will have to “live with the consequences” of Boris Johnson rejecting Theresa May’s plan to continue close economic ties with Brussels after Brexit.

The German chancellor spoke with six European newspapers ahead of Germany assuming the rotating presidency of the EU council on July 1st, and a day after Mr Johnson’s senior Brexit adviser signalled the next phase of talks with the bloc would be tough.

In comments carried by The Guardian, Ms Merkel said: “With prime minister Boris Johnson, the British government wants to define for itself what relationship it will have with us after the country leaves.

“It will then have to live with the consequences, of course, that is to say with a less closely interconnected economy.

“If Britain does not want to have rules on the environment and the labour market or social standards that compare with those of the EU, our relations will be less close.”

Mrs Merkel (65) who has led Germany since 2005 and will retire from politics when her fourth term as chancellor ends next year, also said a no-deal Brexit would not be a personal defeat for her.

She said Europe could only respond appropriately to “reality” as Britain sets out what it wants at the negotiation table.

Ms Merkel’s comments come as Mr Johnson’s Brexit adviser, known as “the sherpa” on EU negotiations, said the “intensified process” in discussions next week needed to be realistic.

David Frost said the UK would not allow Brussels the right to hit back at changes in British law with tariffs.

Earlier, Mr Johnson insisted the UK would reject an EU offer to extend the Brexit transition period beyond the end of the year.

In bullish language, Mr Frost insisted UK sovereignty over laws, courts, and fishing waters was “not up for discussion”.

He also said that what he called some of the EU’s more “unrealistic positions” would have to change in order to achieve progress.

Mr Frost said he was looking forward to the resumption of face-to-face talks in the wake of the coronavirus outbreak.

“The next round of talks with the EU begins on Monday 29th of June. This is the start of the intensified process,” he said.

“For the first time since March we will meet face to face, in Brussels. We look forward to welcoming the EU team to London the week after.

“These meetings will be smaller and focused on seeing whether we can begin to make genuine and rapid progress towards an agreement.”

The UK has a deadline of July 1st if it wants to extend the transition period beyond the end of the year. – PA