A Brexit deal has been reached, here’s what happens next 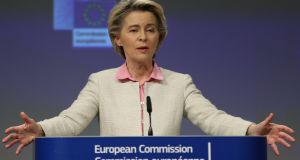 As they announced a deal had been reached with the UK, both European Commission president Ursula von der Leyen and chief EU negotiator Michel Barnier expressed relief, a note of sadness, and a resolve to move on.

“At the end of successful negotiations I normally feel joy. But today I only feel quiet satisfaction and, frankly speaking, relief. I know this is a difficult day for some. And to our friends in the United Kingdom I want to say: parting is such sweet sorrow,” Dr von der Leyen said. “To all Europeans I say: It is time to leave Brexit behind. Our future is made in Europe. ”

The negotiations with the UK long ago became something of an annoyance for much of the EU. They remained high on the agenda only for neighbouring countries, those with the tightest economic ties like France, Belgium, the Netherlands and Ireland. Much of the continent has long moved on, and was already celebrating Christmas rather than following the latest to emerge from the 11th hour talks.

The EU side is moving quickly to finalise the legalities needed to put the arrangements into force for January 1st. EU ambassadors will meet on Christmas morning in Brussels to usher the progress along, a reflection of how tight the schedule became due to the repeated missed deadlines.

The overall agreement largely concerns issues that are shared EU powers like trade, but it does include some aspects that involve a mix of national and EU powers. Technically, this should mean that it requires ratification in national parliaments. However, national governments have the power to waive this requirement, and the Commission will propose that they do.

Westminster is due to hold a vote on whether to ratify the deal on December 30th. It is too late for the deal to be voted on by the European Parliament before it is due to come into force on January 1st. National governments are therefore likely to choose to apply it provisionally – a decision they can take unanimously by written agreement.

The arrangements will then come into force on January 1st. Though some businesses have asked for a “grace period” to give them extra time to implement the arrangements, this is not an option on the EU side, according to an official.

“There is no grace period in this agreement,” an EU official says. “There will be customs formalities . . . companies have got a lot of warnings on both sides of the channel to make sure that they are ready.”