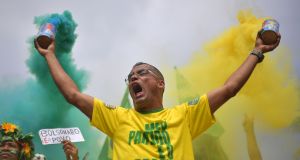 It is highly unlikely that the framers of Brazil’s “citizens constitution” would have sought to celebrate the document’s 30th anniversary with the sort of presidential election campaign that concluded on Sunday.

It started with the early frontrunner, former president Luiz Inácio Lula da Silva, attempting to orchestrate his return to power from the prison cell where he is serving a 12-year sentence for corruption.

After his candidacy was barred by the courts and he was replaced by his former minister Fernando Haddad the man to beat became former army captain Jair Bolsonaro, who in 30 years of public life has expressed nothing but contempt for the country’s democracy, preferring to wax lyrical about the murderous military regime it replaced.

In the campaign’s most dramatic moment, just days after promising to execute his opponents if he won, Bolsonaro was himself almost murdered after being stabbed at a campaign rally by a emotionally disturbed individual. Though possessed of a violent temperament and owner of a myriad of proudly-held prejudices against women, gays, blacks and refugees millions of Brazilians were prepared to overlook Bolsonaro’s contempt for democratic and civic norms because he best incarnated hostility to Lula’s Workers Party.

This has become especially intense in recent years due to the party’s refusal to accept any responsibility for the economic disaster overseen by Lula’s hand-picked successor Dilma Rousseff and its continued denials despite mountains of evidence that its leadership oversaw rampant corruption during its 13 years in power.

With precious little debate about the serious challenges the country faces, and the difficult choices that cannot be put off much longer if it is to avoid a full-blown fiscal crisis, the contest instead descended into a bitter and unedifying spectacle drenched in fake news that has left the South American nation deeply polarised. For Bolsonaro his opponents are nothing but “red bandits” and he has promised to wipe them from the map. He and his supporters in turn have been labelled fascists.

Amid such fury the political centre has been largely vacated.

Whatever the final outcome of the vote the country’s political rule book has been shredded. A herd of big political beasts have been slain. The once highly coveted slots for political broadcasts on television and radio now seem less important to campaigning than dominating the wild west of Facebook and its closed WhatsApp messaging app.

Most importantly the far right has now moved from the cranky fringe to the centre of political power. It will set the tone in the new congress and many of the newly-elected state governors have already trimmed their sails to account for the conservative gale blowing across the country.

This has left many worrying about the future of Brazil’s still relatively young democracy. Dias Toffoli, the president of the country’s supreme court, arrived at his polling station in Brasília carrying a copy of the 1988 constitution, telling reporters that whoever won would have to respect the document’s guarantee of political plurality. “Society has its distinct forces and it is the sum of these that forms a nation,” he said.

But whether the next president agrees with him remains to be seen.

Many are unconvinced that with the end of the campaign the political temperature will drop and polarisation ease. Rather than an aberration, Brazil’s unusually vicious election might just be a curtain-raiser to a new and more divisive political era.