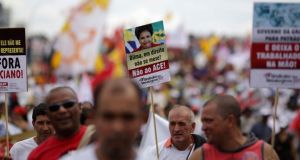 Protesters carry signs during a demonstration organized by various organizations and movements in Brasilia. REUTERS/Ueslei Marcelino


When Marco Feliciano was appointed to head the human rights and minorities commission in Brazil’s congress in March, rights groups were outraged.

They decried control of the congress’s main rights body passing to an evangelical Christian pastor who believes Africans labour under the “curse of Noah”, that “the filthy feelings of homosexuals lead to hate, crime, rejection” and even claims God killed John Lennon for having said the Beatles were bigger.

Protestors invaded the congress building in a failed bid to prevent Mr Feliciano taking control of the commission. Since then the deputy has exulted in his victory, claiming that “for the first time in the history of Brazil, a pastor full of the Holy Spirit conquered a space that until yesterday was dominated by Satanists”.

One of Mr Feliciano’s first moves has been to back a proposal to lift a ban on “treating” homosexuality as a medical disorder, opening the way for a “gay cure”. Undeterred, his opponents have mounted a campaign to remove him from the commission’s presidency.


The struggle has turned into the main front in a increasingly bitter cultural war that pits a liberalising secular Brazil against a conservative reaction whose numbers are being swelled by the country’s fast-growing evangelical Christian movement.

The unlikely leader of the campaign against the pastor is Jean Wyllys, winner of the 2005 edition of Brazil’s Big Brother television reality show. He scraped into congress in 2010’s election with even some in his own Socialist and Liberty party believing he was just another minor celebrity of the type often recruited by Brazil’s political parties to boost their visibility.

But he has since confounded expectations by becoming one of the few respected deputies in a body widely despised by Brazilians for its cronyism and corruption.

The openly gay former teacher had already emerged as a leading voice for gay rights and education reform but he has been catapulted into the national limelight by leading the campaign against Mr Feliciano.

At a recent rally in São Paulo, he said was against “religious fundamentalism and conservatism and today Feliciano is the emblem of this”. The struggle has already turned nasty. Mr Wyllys says he will prosecute Feliciano for insinuating that he promotes paedophilia, while threats mean he now must have a police bodyguard at all times. He accuses the pastor of “incentivising violence”.

Mr Feliciano was also elected to congress in 2010 for the Social Christian party, one of the political arms of Brazil’s evangelical movement. It is an ally of President Dilma Rousseff’s ruling Workers Party which helped install him at the head of the commission in return for the party’s support for her agenda.


Ms Rousseff has so far avoided speaking directly on the campaign against the pastor which has drawn support from increasing numbers of Brazilian singers and actors.

But Mr Feliciano tells his faithful that he is taking on the “Gay dictatorship which is being imposed on Brazil”.

Despite the opprobrium raining down on him in the media, his party already believes the liberal offensive against the pastor will see a huge jump in votes for conservative evangelical candidates in next year’s elections.