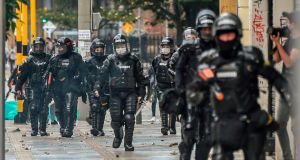 Riot police take position as clashes erupted during the fifth day of protests against police brutality in Bogotá on Sunday. Photograph: Juan Barreto/AFP via Getty Images

Colombians on Sunday held peaceful “reconciliation” vigils as they counted the cost of some of the worst violence in their capital’s history, sparked by the police killing of a man accused of flouting Covid-19 restrictions.

At a memorial in the Plaza Simón Bolívar, Bogotá’s main square, Claudia López, the city’s mayor, read out the names of the 14 people who died in a series of running street battles that began on Wednesday.

The protests were prompted by a video posted on social media which showed two police officers repeatedly using a stun gun at point-blank range on a man they have pinned down in a Bogotá street. The man cried “please, enough, no more!” as onlookers filming the incident begged for restraint. The policemen continued for well over two minutes before arresting the man, accusing him of flouting coronavirus restrictions by drinking alcohol in the street.

The man, Javier Ordóñez, a 42-year-old a father of two, later died in hospital from his injuries.

As news of his death spread on Wednesday, thousands of protesters poured on to Bogotá’s streets, pelting the police with rocks, smashing police stations, looting supermarkets and setting fire to shops, buses and cars. The police responded with baton charges and live ammunition.

The violence continued for three more nights. Most of those who died were in their 20s and the youngest was just 17. Hundreds of civilians were hurt, 72 with gunshot wounds. More than 100 police officers were injured and 56 police stations trashed. Around 70 cars and buses were burnt out. In one incident, a gang of armed men hijacked a bus and killed a woman after running over her.

Ms López told the crowd at a “reconciliation and forgiveness” concert on Sunday that her office had handed 90 minutes of video recordings to the president showing police abuses over recent nights.

“Not even in the battles between the army and the guerrillas in the past were 72 people injured by bullets on just two consecutive nights,” she said.

As she spoke, further disturbances broke out between protesters and police in central Bogotá.

There are many unanswered questions about the killing of Mr Ordóñez and the violence that followed. He was alive at the time of his arrest and the police have not clarified what happened to him in custody. The officers who detained him were suspended and are being investigated for suspected murder. Another five officers have also been taken off duty.

There are conflicting views as to who was behind the violence. Protesters said the riots were a spontaneous response to police brutality – not just the killing of Mr Ordóñez, but many previous incidents of abuse. The government said it had proof that former members of the Farc – the Marxist guerrilla group that signed a peace deal with the state in 2016 – and of the ELN – another left-wing guerrilla group that is still at war with the state – stirred up the trouble.

The government’s initial response was combative. Carlos Holmes, the defence minister, condemned “a mass act of vandalism and violence”. President Iván Duque said police officers should not all be tarred with the same brush.

The next day the authorities struck a conciliatory tone. Mr Holmes and Gustavo Moreno, the head of the police force, both asked for forgiveness for police actions. “We don’t recognise ourselves in this behaviour,” Mr Moreno said, referring to the video. “This is not the Colombian national police force.”

The incidents have shown how combustible Colombia is. The country – like several others in Latin America – had already witnessed weeks of protests in late 2019 over a range of social demands. Police officers shot one protester dead.

The outbreak of the Covid-19 pandemic and a strict lockdown put a lid on that discontent but did not dispel it.

Mr Ordóñez’s death has reignited a debate about policing in Colombia, where the 160,000-strong national force is under the command of the defence ministry, not the interior ministry as in many other countries.

“The vast majority of our police are prepared for war against big drug cartels and organised crime groups, and they do that well,” said César Gaviria, a former Colombian president.

“But the police we have are incapable of and inept in dealing with peaceful marches that are dangerously infiltrated by vandals and anarchists.” – Copyright The Financial Times Limited 2020