Women should not wear bikinis on beach, says Indian minister

Activists enraged over sexist remarks by member of BJP party 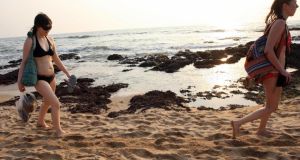 Foreign tourists on Anjuna beach in Goa, India. Goa’s public works minister has said women should not wear bikinis on public beaches for their own safety. Photograph: Indranil Mukherjee/AFP/Getty Images

India’s women activists are outraged over sexist remarks by senior politicians from the western holiday state of Goa and are demanding legal action against them for their misogyny.

Women should not wear bikinis on public beaches for their own safety, added the minister who belongs to a regional party that is in coalition with recently elected prime minister Narendra Modi’s Hindu nationalist Bharatiya Janata Party (BJP).

The BJP and several of its allies have long been known for “moral policing” and their opposition to western mores, lifestyle and dress code.

“We don’t want western culture” the minister (57) said. “Young people go drinking and it often leads to law and order problems. Our sisters and daughters are getting spoilt. Goa was a city of temples and churches. We don’t want pub tourism,” he said.

“This is typical of the BJP’s mindset of wanting to keep women confined and enslaved,” said leading activist Annie Raja. It’s a punitive and anti-woman measure, she added.

“When an industrialist wants permission [to start an enterprise] he has to face 16 [licence] inspectors; but a rape victim has to face only one [police] inspector,” he told a group of entrepreneurs.

Later, after his comment created a furore, Mr Parikar clarified his statement, saying it was “anecdotal and made on a lighter note”.

Meanwhile, an MP from eastern Bengal state who recently said he would unleash his party cadres to rape his opponents’ wives, has apologised for his remarks.

“ Some remarks made by me in the heat and dust of the election campaign have caused dismay and consternation. I apologise unreservedly for them,” said Tapas Pal of the Trinamool Congress party, which rules Bengal.

Mr Pal earlier had told his supporters he would protect them from their Communist Party rivals. “If anything happens to my party workers, I will not spare them [Communists]. I will make their family pay dearly. I will ask my boys to go there. They will rape them [their women],” he said.

Mr Pal also claims he was misquoted. He said he had asked his party men to “raid” not “rape” their opponents, an explanation few accept.