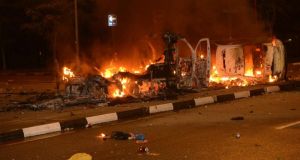 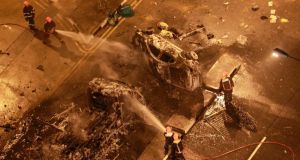 A crowd set fire to vehicles and clashed with police in the Indian district of Singapore late today in a rare outbreak of rioting in the city-state.

The incident reportedly started after a private bus hit and killed a foreign worker in the Little India area. Television footage showed a crowd of people smashing the windscreen of a bus and at least three police cars being flipped over.

Singapore Police Force said the riot started after a fatal traffic incident. “Shortly after, a riot broke out involving a crowd of about 400 subjects where the subjects damaged five police vehicles and one ambulance,” it said in a statement, adding that about 10 police officers were injured.

Little India is usually packed with people on Sundays, with many construction workers from Bangladesh and India gathering there to spend their day off.

Incidents like this are rare in Singapore, which has tough laws on rioting that carry a sentence of up to seven years in prison and possible caning.

“This is a serious incident which has resulted in injuries and damage to public property,” said Teo Chee Hean, deputy prime minister and minister of home affairs. “Police will spare no efforts to apprehend the subjects involved in the riot.”

Footage on Channel NewsAsia showed at least two vehicles on fire and debris strewn across Racecourse Road, one of the main thoroughfares in Little India. Many other private cars were reported to have been damaged as well.

Police reported this evening Irish time that the incident was under control.