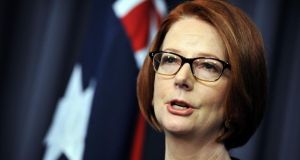 They were among the more than one million British migrants who moved to Australia between 1945 and 1972 under the assisted passage scheme and who were called “ten pound Poms” because that was the price of their subsidised boat fare.

From humble beginnings, Gillard went on to become Australia’s first female prime minister. After studying law at the University of Melbourne, she worked her way up to a partnership at Slater & Gordon, one of Australia’s best-known legal firms.

Elected
But Gillard longed for a career in politics. After failing three times to secure a nomination to run for office with Labor, she was finally elected as an MP in 1998. In opposition, she became Labor’s deputy leader in 2006, under Kevin Rudd as leader. In the run-up to the 2007 federal election, which Labor won with a comfortable majority, Liberal senator Bill Heffernan described Gillard as “deliberately barren” and said she was unfit for leadership because she was childless.

This was seen as an outrageously boorish comment and Heffernan was forced to apologise. But when Gillard later became Labor leader and prime minister, Heffernan’s attack came to look mild in comparison with how she was subsequently treated.

She led an internal coup against Rudd three years and three days ago, saying Labor would lose power under him. But after an initial poll boost, Gillard led Labor to a disastrous 2010 election in which it lost its majority but retained power thanks to independents.

‘Shock jock’
Almost from the moment she became prime minister, Gillard has been relentlessly attacked by opposition politicians, radio hosts, and writers in the Murdoch press, which controls 70.5 per cent of Australia’s metropolitan newspaper market.

“The old man died a few weeks ago of shame . . . to think that he had a daughter who told lies every time she stood for parliament,” Jones said.

Her frequent run-ins with Liberal Party leader Tony Abbott led to a now famous speech in parliament last October, in which Gillard labelled Abbott a misogynist.   But the constant undermining of her authority – from within her own party as well as outside – saw her popularity erode to the point where Labor was facing a landslide loss in the coming federal election.

Many never forgave her for what they saw as her having knifed Rudd in the back in 2010. They also did not forget that she broke the promise that there would be no carbon tax introduced in a government she led.

Though a powerful performer when speaking off the cuff – such as in the case of the “misogyny speech” – Gillard too often spoke in bureaucratic terms which failed to explain complex policies.   The public had stopped listening and Rudd did to her what she did to him three years ago.