Fired journalists and technicians have, in a show of defiance, maintained a continuous online broadcast since television screens went blank 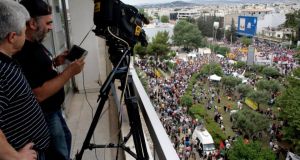 Employees of the state broadcaster ERT work during an online news bulletin broadcast at the corporation’s headquarters during a 24-hour general strike on Thursday. Photograph: Getty

Thousands of Greeks rallied in support of their national broadcaster ERT in Athens and other cities yesterday, after unions called a general strike to protest the government’s sudden shutdown of the station on Tuesday with the loss of over 2,600 jobs.

An estimated 10,000 demonstrators gathered inside and outside ERT’s northern Athens headquarters, where fired journalists and technicians have, in a show of defiance, maintained a continuous online broadcast since television screens went blank after riot police disabled transmitters across the country.

As yesterday’s strike also shut down privately owned radio and television stations and newspapers, Greeks turned to social media and blogs to follow developments which have brought the fragile three-party coalition under increasing strain and raised the possibility of elections.

In Athens, the Communist Party’s channel 902 battled to keep its relay of ERT’s broadcast on air, despite being shut out from digital frequencies after the government threatened sanctions on any Greek station running ERT material, which, free of government control and interference, are proving hugely popular.

Studio occupied
An official at the European Broadcasting Union in Geneva, which took the unusual step of livestreaming the broadcast from ERT’s occupied studios from 7pm on Wednesday night, told The Irish Times it had 210,000 viewers by noon yesterday, with most viewers coming from Greece, followed by Germany, the UK and Cyprus.

The strike took place amid mounting international criticism of the Greek government’s action, with French daily Libération asking “Who turned off the telly?” in a headline. Condemnation also came from the Council of Europe’s human rights commissioner, Nils Muiznieks, who said pulling the plug on ERT dealt “a heavy blow to a fundamental pillar of democracy”.

Meanwhile, there was no sign the deep divisions that have emerged between conservative prime minister Antonis Samaras and his two junior coalition partners over the ERT shutdown will be bridged any time soon, with the political uncertainty likely to continue over the weekend after party leaders pushed back a Saturday meeting to Monday.

In a speech on Wednesday, Mr Samaras expressed little willingness for compromise, saying there could be no going back on shutting down ERT, which he described as “sinful” and “a symbol of lack of transparency and waste”, and replacing it with a new, downsized broadcaster. That approach flies in the face of the stance taken by coalition partners, who insist ERT must remain open during any restructuring.

Offer shunned
Mr Samaras suffered a major blow yesterday when a constitutional professor who headed an earlier attempt at reforming ERT declined an offer from the prime minister to oversee the creation of ERT’s replacement. Speaking on air from the studio of occupied ERT, Nikos Alivizatos said he could not be involved while the broadcaster “remains shut”.

Former press minister Elias Mossialos suggested a plan for ERT under which all staff members would have undergone evaluation by an independent commission, to identify and retain the best staff in a company where many hirings were due to political favouritism and clientelism.