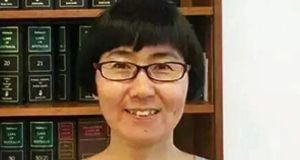 Wang Yu, whose son Bao Mengmeng (16) has been abducted from his guesthouse in Burma.

The 16-year-old son of detained Chinese human rights lawyer Wang Yu has been abducted from his guesthouse in Burma (Myanmar) in what appears to be a shadowy cross-border operation involving mainland Chinese state security.

Bao Mengmeng had been trying to get out of China to study overseas.

He was taken away from the Huadu guesthouse, in the border town of Mongla, by Burmese police on Tuesday, the China Change website reported, along with two men, Tang Zhishun and Xing Qingxian.

All three crossed the border as tourists during China’s National Day holidays, around October 1st, the report said.

Bao, whose real name is Bao Zhuoxuan but who is known as Bao Mengmeng, was detained as part of that crackdown with his parents Bao Longjun and Wang Yu. Bao’s mother Wang Yu has been consistently harassed, threatened, searched and physically assaulted by police since she began to take on rights-abuse cases in 2011.

She is being held at an unnamed venue in Beijing on suspicion of “picking quarrels and stirring up trouble”, as well as the more serious charge of “incitement to subvert state power”, charges commonly used to hold rights activists.

She has represented moderate ethnic Uighur academic Ilham Tohti, who was jailed for life on separatist charges, a verdict described by Amnesty International as “deplorable”. She also represented outspoken rights activist Cao Shunli, who died after being denied medical treatment in detention, as well as members of the banned Falun Gong spiritual group.

Ms Wang has also represented petitioners forced out of their homes, feminist activists and others seeking rights to freedom of expression and religion in China. Ms Wang’s colleague Yu Wensheng confirmed the report of Bao Mengmeng’s detention, saying Ms Wang’s son was most likely already in Chinese hands.

“I am still not sure whether they were detained by Myanmar police or by Chinese police who had crossed the border,” he told Radio Free Asia.

Bao had been trying to leave China to study in Australia, but had been told by police that his departure would “harm state security” and his passport was confiscated.

Mongla is one of the largely Chinese areas in Burma that is currently a military zone.

The local language is Chinese. It is controlled by former Chinese citizen Lin Xianming and his son Lin Daode of the 815 Army of the People’s Liberation Army.

The Chinese yuan is used there, and there are close political and economic links.