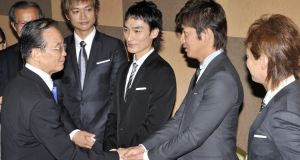 Chinese prime minister Wen Jiabao with Smap: they announced on television that they were staying together after their agent said they were mulling a breakup. Photograph: Yoshikazu Tsuno/AFP/Getty Images

Just three weeks into the New Year, Japan’s Fuji TV may already have scored the highest ratings of 2016 with what, on the surface, seems an unlikely attraction: five middle-aged men in dark suits saying “sorry”.

The men belong to Japan’s most famous boy band, Smap. Their funereal appearance on January 18th to end rumours of a split attracted over a third of Greater Tokyo’s huge television audience.

Smap have been a fixture of Japanese popular entertainment for quarter of a century. In addition to selling about 35 million records, they are a ubiquitous presence throughout the year on television.

So media reports that they were about to call it a day caught everyone’s attention. Their terse, desultory apology for “causing trouble” suggested to many that they were not there entirely by choice.

Smap’s talent agency, Johnny & Associates, has a fearsome reputation for controlling both its stars and the broadcasting schedules they service with frothy entertainment.

Like the Hollywood moguls of old, talent agencies in Japan and South Korea run the entertainment industry with an iron fist, keeping their stars in line and coaxing television schedules into submission.

Smap were recruited as boys and have been working constantly since under the tutelage of their agency’s legendary 87-year-old founder Johnny Kitagawa. The oldest members of the group are now in their 40s.

Membership of agencies is like being in a family, says Hiro Ugaya, a journalist who wrote a book about Japan’s entertainment industry.

Kitagawa is a “patriarchal authority” figure, “like the godfather,” he says. Leaving is seen as an act of betrayal.

Johnny & Associates has long been dogged by claims that it exploits its young charges, commercially and even sexually. In 2000, a magazine ran interviews with former stars describing sexual assaults.

Kitagawa fought the claims but the Tokyo High Court said they were true.

Many young stars are banned from dating or anything that might break the spell over their fans. In South Korea, young recruits are drilled in bootcamps and often undergo cosmetic surgery.

Concerns about the treatment of underage performers pushed the government there into setting new rules in 2014 to limit working hours.

Youngsters, of course, don’t always toe the line. In one of the most famous incidents, Minami Minegishi, a member of the Japanese all-girl group AKB48, was caught by a tabloid magazine emerging from a late night tryst at her boyfriend’s apartment. She subsequently shaved her head and made a tear-stained act of contrition to keep her job.

This week, the Tokyo District Court stuck a blow for her and others when it rejected a suit by a talent agency that said one of its former stars breached her contract by dating a fan. The court said the contract “restricted her freedom to pursue happiness”.

Smap’s five-minute mea culpa was even more poignant than teens prohibited from having private lives. The five men said nothing about rumours of the split or what had brought them in front of the cameras.

Instead, they spoke in entertainment platitudes. “Starting today, we once again want to make you smile,” said Shingo Katori, once considered the joker of the group.

Some saw the group’s predicament as lessons for the nation as a whole and its struggle to free itself from the clutches of cartels run by elderly men. “This is Japanese society in miniature,” said economist Nobuo Ikeda, in The Japan Times.

“Salarymen, who are typically hired right out of school . . . start by learning [elementary skills] on the job,” said Ikeda. “These include company-specific skills learned by watching more experienced workers, like personal skills, meaning they aren’t useful in other companies.

“As companies rarely hire mid-career, this situation is like the entertainment industry where those who go independent never have a second chance.”